Prime Minister Benjamin Netanyahu met with Shas spiritual leader Rabbi Ovadia Yosef late Sunday and discussed with him at length the efforts to secure the release of Jonathan Pollard and Ilan Grapel.

Rabbi Yosef urged Netanyahu to persist in his efforts to bring Israeli captives home after the return of Gilad Shalit and to focus on the Israeli agent incarcerated in the US since 1987. Netanyahu replied by saying that he was making the utmost efforts in the matter and updated him on recent developments.

According to Netanyahu, progress has also been made with regards to Ilan Grapel who is being held in Egypt. 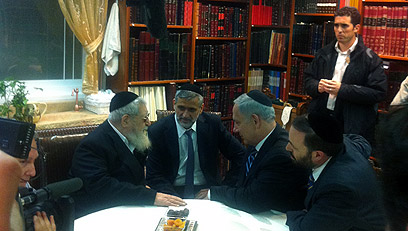 Netanyahu's visit sparked much interest on the haredi street as rumors began to spread, among them a report about progress in efforts to release Pollard, or about the prime minister's intention to ask the rabbi for a blessing to resume negotiations with the Palestinians.

In July, Shas Chairman Eli Yishai relayed a letter from Rabbi Yosef to the US ambassador in Israel, urging President Barack Obama to free Pollard. Yishai was attending a reception held at the ambassador's home for the 4th of July.

The meeting also included a discussion of political matters and some of it was kept secret. At one point, all aids and security guards were asked to leave the room as only Netanyahu, Yosef and the two senior Shas ministers - Yishai and Ariel Atias – remained.

Netanyahu thanked Rabbi Yosef for his support of the Shalit deal and asked him for a blessing for his 62nd birthday which took place several days ago.