US withdraws ambassador from Syria

US State Department says it pulled its ambassador to Syria, Robert Ford, out of the country because of threats to his personal safety

The US State Department said on Monday it pulled its ambassador to Syria, Robert Ford, out of the country because of threats to his personal safety.

Ford, who had upset Syrian leaders by publicly supporting protesters challenging 41 years of rule by the Assad family, has returned to Washington.

Op-ed: Assad is next in line 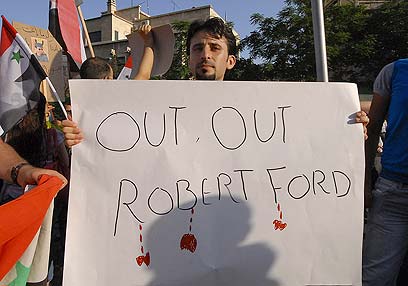 "Ambassador Robert Ford was brought back to Washington as a result of credible threats against his personal safety in Syria," State Department spokesman Mark Toner said. "At this point, we can't say when he will return to Syria. It will depend on our assessment of Syrian regime-led incitement and the security situation on the ground."

Asked if the United States had any plans to expel the Syrian ambassador to Washington, Imad Moustapha, a US official said: "Not at this time."

The official, who spoke on condition of anonymity, noted Ford was not officially "withdrawn" from Syria but rather was called back for consultations because of security concerns.

During seven months of protests against the government of Syrian President Bashar al-Assad, Ford has courted the opposition and denounced Assad on Facebook. As the government instituted a deadly crackdown on protests, Ford defied a travel ban on Western diplomats by going to hotspots and meeting with anti-government demonstrators.

Last month pro-government demonstrators threw rocks, concrete blocks and tomatoes at Ford and his aides, as well as attacking their cars with metal bars, during their visit with an opposition figure in Damascus.

"Articles, more inciting against Ford than usual, have appeared in state media recently," said one of the diplomats, who like others asked not to be identified due to the sensitivity of the issue.

Toner said the decision to pull Ford was to ensure his safety.

"We hope that the Syrian regime will end its incitement campaign against Ambassador Ford," he said.

Ford arrived in Damascus in January and became the first US ambassador to Syria in five years.