The Jerusalem Police on Monday ended the heightened security alert called in the capital after several tense hours.

Security forces in Jerusalem were on high alert during the afternoon following intelligence indicating an imminent threat of terror which may strike the city.

Large police forces deployed in the city, aided by police helicopters in an attempt to foil the threat. 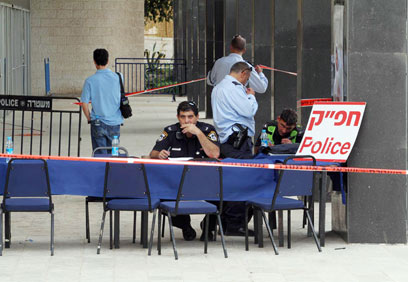 A teen was stabbed in the Ramot neighborhood in the capital on Saturday, sustaining serious wounds.

Following the incident, the police and the army launched a massive manhunt for the attacker. IDF troops searched the nearby Palestinian village of Beit Iksa, where he was believed to be hiding. A suspect is yet to be apprehended.

The victim, 17-year-old Yehuda Ne'emad, underwent surgery, and on Sunday hospital officials said his condition was defined as moderate.

After stabbing Ne'emad, the perpetrator chased a 12-year-old girl who stood nearby. The girl managed to escape when the perpetrator was scared away by a gathering crowd.