The Political-Security Cabinet has unanimously approved a prisoner exchange deal with Egypt that will see the release US-Israeli citizen Ilan Grapel from Cairo prison in exchange for 25 prisoners serving their sentence in Israel. Grapel is set to be released Thursday.


Similarly to the Shalit swap, 48 hours will be given to file petitions to the High Court following the publication of the list of prisoners.

Meanwhile, an Egyptian security source said Tuesday that unprecedented security measures are being arranged at the Taba border crossing ahead of the imminent release of dual US-Israeli citizen Ilan Grapel, al-Ahram reported. 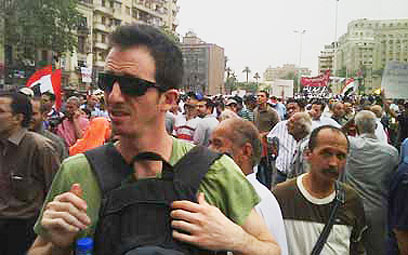 Israel's Political-Security Cabinet convened Tuesday to approve the prisoner exchange deal which will see Grapel freed after four months in an Egyptian jail. Grapel was held on espionage charges and is likely to be released later this week.

The same source estimated that Grapel, 26, will be handed over to Israel at night under heavy security. A "high ranking security figure" will supervise the handover. He added that Grapel is set to be transferred via a car with a civilian license plate which will travel from Cairo to Taba.

The report also suggests that Israel will transfer the Egyptian prisoners via the Taba crossing. Grapel will be taken to Eilat where he will meet with his family while the prisoners reunite with their own families. The names of the prisoners have yet to be released. The Prime Minister's Office denied any security prisoners will be freed despite various reports alluding to the matter. Among the Israeli representatives who negotiated the agreement with Egypt was Kadima MK Israel Hasson, a former Shin Bet official. "It's not a deal, Egypt is not Hamas. There was a dialogue between two nations who are partners in this," he told reporters after returning from Cairo where he met Grapel. "It was a moving and at times amusing meeting. He didn’t know who we were and was not aware of our efforts," he said. "He had some access to the media but not to reports concerning himself." Grapel told Hasson he was treated fairly, had met with his parents on Rosh Hashana and had telephone conversations with them.

Hasson also addressed the current situation at post-revolution Egypt. "We underestimate the new regime in Egypt. It has overcome obstacles in the past few months in a commendable manner. Contrary to what we thought, not all Egyptians want to get rid of the peace treaty. We must keep in mind that Egyptian commandos injured almost 1,000 Egyptians to rescue our men at the embassy."