Prison Service publishes online list of 25 Egyptian inmates to be freed in exchange for release of US-Israeli citizen. Most prisoners arrested for drug smuggling, trafficking and infiltrating into Israel

The Israeli Prison Service has published an online list of 25 inmates expected to be free from jail in exchange for the release of US-Israeli citizen Ilan Grapel currently detained in Egypt. All of the prisoners were suppose to be released from jail within the next six years.

According to the agreement, Grapel is expected to be released on Thursday and arrive in Eilat where he will meet with a United States congress member. On Friday he will depart to the US and reunite with his family, which he has not seen for the past six months.


In return, the 22 Egyptian inmates and three minor detainees will be transferred to their homeland. Most of the prisoners were arrested for drug smuggling and trafficking as well as infiltrating into Israel. 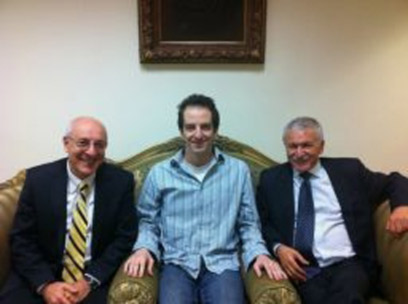 The Political-Security Cabinet has unanimously approved a prisoner exchange deal on Tuesday with Egypt that will see the release Grapel from Cairo prison in exchange for 25 prisoners serving their sentence in Israel.

Similarly to the Shalit swap, 48 hours will be given to file petitions to the High Court following the publication of the list of prisoners.

Meanwhile, an Egyptian security source said Tuesday that unprecedented security measures are being arranged at the Taba border crossing ahead of the imminent release of dual US-Israeli citizen Ilan Grapel, al-Ahram reported.

Raanan Ben-Zur and Aviel Magnezi contributed to the report