WASHINGTON – The Anti-Defamation League (ADL) and the American Jewish Committee (AJC), two of the most prominent Jewish-American organizations in the United States, on Sunday issued a joint “pledge” calling on Jewish and Israel groups not to criticize President Obama’s record on Israel.

The "National Pledge for Unity on Israel," aims to promote bipartisan support for Israel while preventing the Jewish State from becoming a wedge issue in the upcoming campaign season.

However, not all Jewish organizations supported the bid, The Emergency Committee for Israel (ECI) Chairman William Kristol saying his organization will not be signing the pledge. 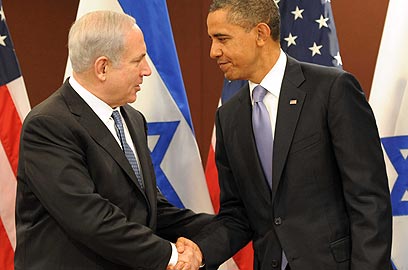 Netanyahu and Obama at UN Assembly (Photo: Avi Ohayon, GPO)
"Here’s the Emergency Committee for Israel’s answer to Directors Abe Foxman and David Harris: You must be kidding," Kristol wrote in a statement. "Indeed, this attempt to silence those of us who have 'questioned the current administration’s foreign policy approach vis-a-vis Israel' will re-energize us. Nor, incidentally, should those who support the administration’s approach to Israel be bashful about making their case. Directors Harris and Foxman need a refresher course on the virtues of free speech and robust debate in a democracy. Their effort to stifle discussion and debate is unworthy of the best traditions of America, and of Israel," he stated According to ADL National Director Abe Foxman and AJC Executive Director David Harris, the initiative stems from the Jewish community's "strong interest in ensuring that American support for Israel is one of the critical strategic issues that unites rather than divides parties and officials."

In an interview with Ynet, Foxman explained the move, saying he was the first to criticize President Obama for anything ranging from the United States' policy toward the settlements to the administration's treatment of Prime Minister Benjamin Netanyahu.

Foxman noted that it's one thing to criticize his policy and a completely different matter to turn Israel into an internal political issue.

In the joint statement issued by the organizations, Foxman and Harris noted that "US. – Israel friendship should never be used as a political wedge issue. At a time when Israel is confronting new dangers and challenges in a fast changing Middle East, the United States must continue to project to the world the solid support of the American people and their elected representatives for Israel’s rights and quest for peace and security."