Ilan Grapel is on his way home: US-Israeli national Ilan Grapel has landed safely back in Israel on Thursday as part of a prisoner exchange deal which saw the release of 25 Egyptian prisoners who were incarcerated in Israel.

Grapel, 27, was arrested in Cairo in June on alleged espionage charged – which were vehemently denied by Israel.


Grapel departed from Cairo together with Knesset Member Israel Hasson and Attorney Yitzhak Molcho, who arrived in Cairo earlier on Thursday.

Grapel returns to Israel after 4 months

A total of 25 prisoners, including three minors, were transferred to Egypt after being shuttled to the Taba border crossing by the Israel Prison Service. Israeli representatives reported that Grapel was doing well and is thrilled to come back home. His mother Irene greeted him at the Ben-Gurion Airport.

Shortly after arriving in Israel Grapel and his mother met Prime Minister Benjamin Netanyahu in his chambers in Jerusalem. Congressman Gary Ackerman told Grapel Netanyahu had promised him in June he would do everything in his power to bring him home. Grapel, in turn, replied that that is what helped through the tough times.

The US State Department issued a statement welcoming Grapel's release.

"The United States welcomes the release of Ilan Grapel, who we have worked hard to bring home since his June detention in Egypt. We thank the Governments of Egypt and Israel for their roles in reuniting him with his family. The Egyptian-Israeli Peace Treaty is a vital element of regional peace and stability, and we strongly support both countries’ sustained commitment to its provisions." 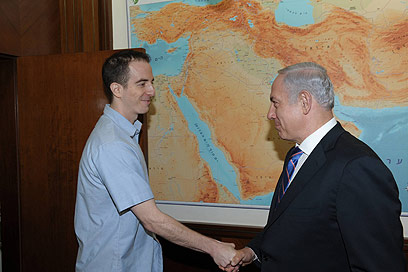 The Egyptian prisoners were given a warm welcome upon their arrival and were greeted by family members and an Egyptian TV crew, which broadcast the handover live.

The first three to be transferred were minors. Upon crossing the Taba border they kissed the ground. The three told an Egyptian reporter they were treated well in Israel but have no intention to return in the future. Upon their arrival in Egypt, some of the prisoners told local TV about their confinement conditions. "It was hard to be in prison, we were separated," one inmate, who spent six years in jail, said. "I was told I'm getting out on Tuesday." Another prisoner charged with drug trafficking claimed they were all treated "very badly." According to Arab media reports, Washington – which was instrumental is brokering the deal – used the sale of F-16 fighter jets as an incentive for Egypt. Israel had opposed such sales in the past.

Once in Israel, Grapel will be debriefed by defense officials. He will then board a plane to the United States, where he will be reunited with his family. The Grapel prisoner exchange between Israel and Egypt was set in motion only after it overcame a few legal hurdles: Wednesday saw the High Court reject several petitions moving to suspend the prisoner exchange, ruling that "it is unfitting for the court to intervene in a decision made by those who are privy to all the political and security information, and responsible for the (deal's) consequences."

The court sided with the State, whose rebuttal to the petitions stated that the swap was "a purely diplomatic procedure… which goes to the heart of the Executive Branch's authority.

"There is no need to speak at length about the importance of the ties between Egypt and Israel and the preservation of trust between the two countries at this point in time and in general."