Israeli spy serving life sentence in US moved by end of Gilad Shalit's Hamas captivity; tells wife: 'I hope I'll get out of here alive, too'

"Gilad Shalit's release gives me hope. I hope I get out of (prison) alive too," Israeli spy Jonathan Pollard, who is serving a life sentence on the United States, reportedly told his wife Esther. According to a Thursday report in Yedioth Ahronoth, the comment was made in a phone conversation between the Pollards, held several days ago.

Report: Biden torpedoed Pollard's pardon   Esther Pollard said that her husband had prayed for Shalit's safe release and was moved by the news that the Israel- Hamas prisoner exchange deal proved successful. 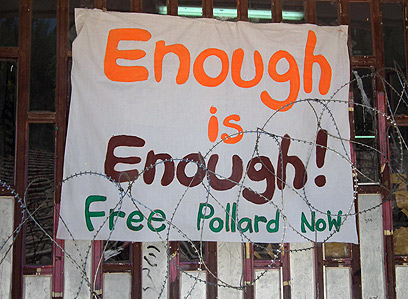 "Gilad Shalit's release gives us new hope about Jonathan's release… since (Shalit's) release I've received many letters from people all over the world, expressing their hope that our nightmare will also be over soon.

"People have said that they can't believe that even at a point in time when things with Hamas are getting done, even with the friendliest country to Israel and even with President (Barack) Obama who believes in justice and human rights – this issue remains open and they don't free him."

Pollard's wife mentioned that during the past few weeks her husband has been suffering from severe pains and was even unable to make it to the phone on a number of occasions. Sometimes Congress members had to be called in to intervene so Pollard would be given pain killers to ease his suffering.

"When I heard about US Vice President Joe Biden agreeing to meet with Jewish leaders to discuss Jonathan's release I felt, for a moment, that I can see the end is near.

"Even the CIA chief, state secretaries and numerous senior officials maintained there is disproportion here and that he must be set free. Meanwhile, three weeks have gone by. I just hope it happens before it's too late. I feel that Jonathan is struggling everyday to make it to the next day."