State officials estimated Saturday night that the escalation in the south will most likely end soon because both Israel and Hamas have no interest to make the situation worse.

"The response to the IDF attack in the afternoon was foreseeable, however at this time Israel is not interested in escalation. Therefore it is estimated that this situation will end soon, unless severe injuries will be caused to Israelis." 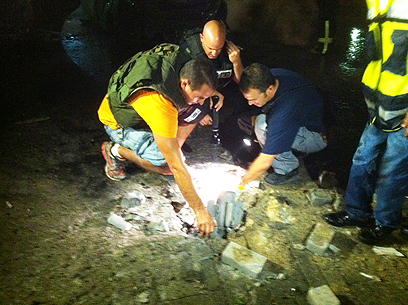 Meanwhile, Foreign Minister Avigdor Lieberman warned Saturday evening that the continuation of rocket attacks from the Gaza Strip “will have implications in the coming days.”

Lieberman, who is currently in Bosnia, said that Israel will not sit idle while rockets are being fired at the Jewish state.

“We do not seek a confrontation with the Palestinians and do not wish to escalate the situation, but we shall not sustain one barrage after another without responding,” he said.

The foreign minister said he hoped the fire would end Saturday night, as result of diplomatic intervention by neighboring countries, the international community and the Palestinian authority. He made the comments in a press conference in Bosnia. Lieberman added that the rocket fire highlights the importance of Israel’s insistence on security arrangements in its diplomatic negotiations with the Palestinians. On Friday, Israel's Ambassador to the UN Ron Prosor sent a letter to UN Secretary-General Ban Ki-moon, demanding the United Nations denounce Wednesday's Grad attack. Prosor urged Ban to enforce Security Council Resolution 1860, decreed after Operation Cast Lead, which demands an end to Gaza arms smuggling.

"The enemies of peace again showed their determination to carry out violence on the ground,” the UN envoy wrote. "At the same time that Israel takes bold steps to expand commercial activity and advance international development in Gaza, terrorists use the area as a launching ground for attacks against the Israeli people.