After Beersheba rally called off, protest leaders say situation in South cannot be used as excuse to defer people's demands

In wake of the escalation in the South that led to the cancellation of the social protest rally in Beersheba, over 20,000 people gathered in Tel Aviv’s Rabin Square on Saturday night to renew their call for social justice in Israel.

According to the movement’s leaders, “The situation in the south should not make us change our demand for social justice.” 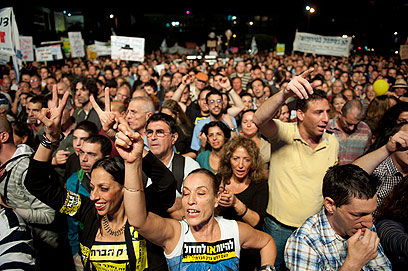 One of the leaders, Stav Shaffir, said, “We are again marching while there is fire in the south. Rallies have been cancelled and those who are marching are doing so in pain. But it is clear to us all that we must. That the real war here is about the future of this society and that we will have to fight for an extended period of time.”

Meanwhile, another 3,000 marched in Jerusalem, among them National Student Union Chairman Itzik Shmueli, who said: "The people gathered here prove that the protest isn't going anywhere until we reach concrete solutions."

As in all past Tel Aviv rallies, people from all walks of life flocked to Rabin Square. Protester Maya Rimmer told Ynet that "Every prolonged process has its waves. We are at the start of the second wave – that's the important thing." Rimmer voiced support for the decision to cancel the Beersheba protest, but she too stressed the fact that the security escalation in the south "cannot come at the expense of our demands for social justice."

'Not the final word'

Earlier, Adar Stern, one of the leaders of the protest movement in Beersheba explained the decision to cancel the event in the southern city: “The organizers of the demonstration understand the situation. We are not interested in putting people’s lives at risk but we will find other ways to continue with our protest."

According to Stern, “We will hold the demonstration as soon as the situation allows it. This is not the Negev’s final word.”

Police forces in Tel Aviv are deployed along the rally’s route – from Rothschild Blvd. to Rabin Square.