Ashkelon resident Moshe Ami, 56, died Saturday after sustaining serious shrapnel wounds by a rocket fired at Ashkelon as part of a relentless attack from Gaza. Another victim was lightly injured. Both were taken to the Barzilai Medical Center.

Meanwhile, a rocket hit gas containers outside a nearby house. No injuries were reported. Several people suffered anxiety attacks. Later, a rocket exploded in an open area in the Shaar Hanegev Regional Council shortly after a Color Red alarm sounded in the region. An alarm also sounded in Sderot. No injuries or damage were reported.


In total, some 24 rockets and mortar shells were fired at south Israel on Saturday. In addition, two mortar shells hit the Eshkol Regional Council. No injuries or damage were reported. A total of six mortar shells exploded in the council. 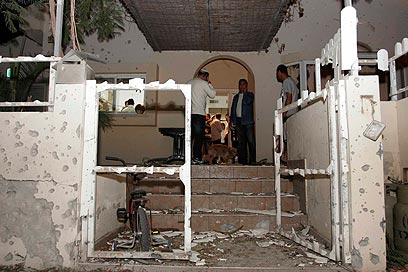 Police Commissioner Yohanan Danino ordered the alert level in the south be raised to the second-highest, 3 out of 4 after holding a status evaluation with Home Front Command and police officials.

Internal Security Minister Yitzhak Aharonovitch visited the impact site in Ashdod where a rocket caused vehicles to catch fire. "Anyone who tries to fire at the State of Israel must be targeted, we need a harsh response. I believe this isn't over yet," he said.

"The other side must understand that the IDF has the power to retaliate. They must not test us. If we have to we’ll mount a big operation."

The previous rocket barrage saw one rocket hitting the parking area of a five-story building in Ashdod. One person was lightly hurt and several others suffered anxiety attacks. Damage was caused to the building and several vehicles caught fire. Dr. Bezalel Shaham, an orthopedist from the Kaplan Medical Center said: "Thus far we have received eight injuries as a result of the rocket fire. They include one person in moderate condition who was hit by shrapnel in his vehicle, a girl from Kiryat Malakhi who was hurt while running for cover and five people who suffered anxiety. Most of the victims will be discharged tonight."

Meanwhile, the Education Ministry said that some 200,000 students in communities up to 40 km from the Gaza Strip will not attend school on Sunday. The communities include, among others, Beersheba, Ashdod, Ofakim, Kiryat Gat, Gan Yavne and Netivot.

Saturday's escalation was prompted by an IAF strike in Gaza which saw five Islamic Jihad terrorists killed. The terror cell had fired a Grad rocket at Be'er Tuvia on Wednesday night and was ready to mount another attack.

Saturday's rocket fire claimed the life of 56-year-old Moshe Ami, a father of four and an infrastructure contractor. His partner, 55-year-old Ela Costin, said Moshe was on his way home to Ashkelon from Petah Tikva when the rocket exploded.

"A few minutes later the alarm sounded. I heard it and called him back. At first he didn't answer me. Then I heard the explosion not too far from my house. The second time (I called) he answered. I asked him if he was okay, and he said he was hit by shrapnel."

Police officials said Moshe was injured when shrapnel hit his car and wounded his abdomen. At first he was classified as a mildly injured victim and taken to Barzilai Medical Center in the city.

However his condition deteriorated quickly and surgeons were called in to try and save his life. Nearly an hour and a half later Moshe died on the operating table.

"He had a heart of gold. He was a good man who helped everybody and no one had one bad word to say about him," said Costin.