Across southern towns that were devastated by rocket attacks, resident claim it was a miracle they weren't hurt

The state-mandated precautions have minimized the casualties and damage that could have been caused in the recent onslaught of rockets on the south, but several residents claimed that it were the unlikely coincidences that saved them.

In Ashdod, cars were destroyed, apartment windows were shattered and holes in an apartment building's exterior bore testimony to the Grad rocket that hit on Saturday. New brickwork has already replaced the crater carved by an explosion in a residential parking lot, but the neighbors cannot stop talking about the miracle that caused the rocket to land directly between two apartment buildings.

"My family and I … ran to the protected zone when the alarm went off," Eran Peretz, a resident of one of the buildings, told Ynet. "The force of the explosion made us think that the rocket hit our home, but then we saw that it was outside, although the building was covered in smoke."

Eleven rockets and mortar shells were fired from the Gaza Strip on Saturday night. The barrage prompted IDF retaliation, which killed nine Palestinian operatives. The south was quiet on Sunday morning, and a ceasefire was announced early in the afternoon.

Another resident of the Ashdod complex, Yossef Azriel, 87, usually sits on his porch in the evenings; on Saturday, he went to his kitchen for a moment to peel a pomegranate when the rocket exploded under his window. He said he never heard the alarm or ran to his protected space; he remained seated in his kitchen. 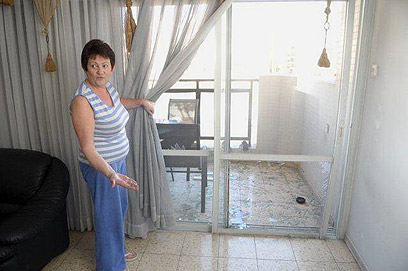 "Your best chance for not getting hit during such an incident is to keep a low profile," he told them. "The citizens who are outside must lie on the ground, and in any case it is preferable to be in a protected area."

Haim Elimelech, 50, credited his neighbor's car as his savior. The Gan Yavne resident told Ynet from his hospital bed in Rehovot's Kaplan Medical Center that he sat down in his car on his way to look for his son when the rocket hit mere meters from him. 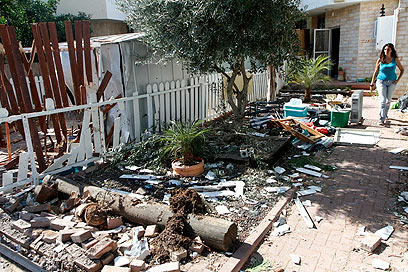 Rocket damage in Gan Yavne (Photo: Amir Levy)
"The neighbor's car, which was located between me and the explosion, got the worst of the damage," he said. "Maybe if it wasn't there, we wouldn’t be sitting here talking right now." Two mortar shells, which initially were reported to have exploded in open areas, later turned out to have hit a kibbutz at Sha'ar Hanegev Regional council. One exploded near a basketball court and damaged the surroundings, while the second exploded on the other side of town, near residential buildings. No one was injured. "At 5:45 am the Color Red alert went off and we ran to the protected space," Varda Goldstein, a resident of the kibbutz, told Ynet. "We heard the explosion, and then I realized that it hit very close. When we left the protected space, I saw smoke a few dozen meters from the home. Luckily, no one was injured." The tension has been a feature in her family's life for the past decade, Goldstein said.

"We try to function normally under abnormal circumstances, try to maintain a routine, go to kindergarten, school and work," she said. "I can't say whether I'm optimistic or not about the rocket fire. It has been almost 10 years.

Yoav Malka and Neri Brener contributed to the report