Hundreds attend funeral of Moshe Ami, 56, but not a single member of the governments was among them

In wake of the continued escalation in southern Israel, hundreds of family members and friends on Sunday afternoon attended the funeral of Moshe Ami, who was killed by a Grad rocket attack in Ashkelon on Saturday.

Family members were upset that not a single member of the government took part in the funeral.

Moshe, 56, was divorced and a father of four. In the first Lebanon War he lost his brother Yossi and six years ago his father passed away. 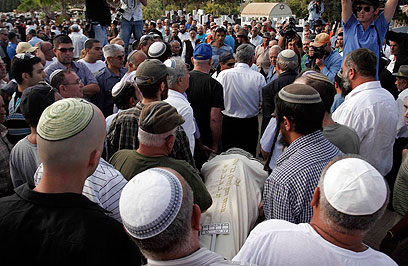 In the past two years, Vaknin lived with his girlfriend, Elah Kostin. She said he had just returned from Petah Tikva when he was hit by the rocket. "We agreed that as soon as he arrived we would go to the supermarket. He called around eight when he arrived in Ashkelon and said that he can go shopping," she recalls. "I told him I missed him and that he should come home. Moments later a siren was heard. I called him. At first he didn’t answer. I heard the explosion not far from my house. The second time he did answer and said that he was hurt by shrapnel," Kostin said.

According to the police, Moshe was hurt in his stomach while in his car. At first he was listed in moderate condition and was evacuated to Barzilai Hospital in the city, where his condition deteriorated. Surgeons were rushed to his side but efforts to save him failed. 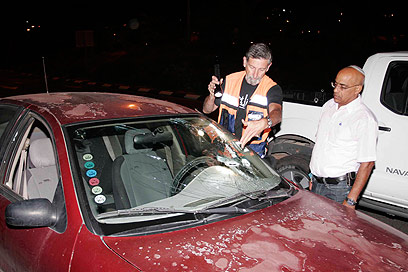 Moshe's car after being hit by shrapnel (Photo: Eliad Levy)

Kostin said that even after his divorce, Moshe continued his relationship with his wife and kids. "He was a man with a golden heart, a good man, who helped everyone. No one ever said anything bad about him. I had imagined us growing old together." In her eulogy, his sister Zehava said, "We lost a brother in Lebanon and Moshe only tried to help Elah, the kids, the grandkids... You loved to sing, go out fishing and many more things. We will never hear your voice call out: sister," she said. Ashkelon Mayor Beni Vaknin knew Moshe and his family well. He said that Moshe also had a license to fly light aircrafts. "I remember the family very well from the 1950s and 60s. He loved this country," the mayor said.

Vaknin called on the government to "wage a relentless war against the blood-thirsty terrorists who only seek to harm innocents."