According to the British newspaper, the report was prepared for the Trident Commission, an independent cross-party initiative set up by the British American Security Information Council (BASIC).

Report: Israel could use ballistic missiles against Iran

"In the case of Israel, the size of its nuclear-tipped cruise missile enabled submarine fleet is being increased and the country seems to be on course, on the back of its satellite launch rocket program, for future development of an inter-continental ballistic missile," the report said. 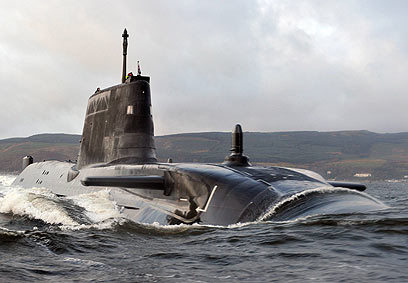 Nuclear submarine (Illustration: AP)
Israel currently has three submarines and two more being manufactured in Germany. Earlier this year, the Der Spiegel reported that Germany had granted Israel's request to provide it with a six Dolphin submarines said to be capable of carrying nuclear weapons. Dolphin submarines are manufactured in the city of Kiel in Germany. Experts estimate they are have the longest cruising range of all submarines. Some reports claim they are also able to carry and launch nuclear weapons. Berlin had granted the request after several years during which Israel has been pushing for the deal. Meanwhile, the world's nuclear powers are planning on spending hundreds of billions of dollars modernizing and upgrading their nuclear warheads, The Guardian said. Despite budgetary issues and international rhetoric calling for nuclear weapons disarmament, the report points to "era of nuclear weapons." According to the report, the United States will spend some $700 billion on its nuclear weapons industry in the upcoming decade, while Russia is expected to spend &70 billion on cruise missile systems alone. Other countries, including Israel, India, China and Pakistan, are also expected to spend significant amounts of money on their strategic weaponry systems.

The Basic report claimed that for countries such as Israel, Russia, Pakistan and France, having nuclear weapons is not just about deterrence. For Russia and Pakistan nuclear weapons are also designated for attacks, claimed the report.