Defense Minister Ehud Barak called on the Knesset's Finance Committee on Tuesday to increase the defense budget frame by an additional NIS 7-8 billion ($2 billion) in the 2012 national budget.

Barak claims that only if the budget is increased will the country's security needs be managed in a "responsible way" while fulfilling part of the Trajtenberg recommendations. 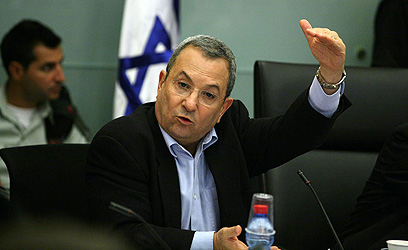 The defense minister stressed that he has over 30 years of experience dealing with state budget issues, starting from his days in the IDF General Staff. "To the best of my understanding, in the current budget framework, we will not be able to meet both the minimal demands required to maintain state security and the needs of Israeli economy and the social protest."

According to Barak, "Our main claim is that although the defense budget can be cut, there should be no illusion that one can find billions from this cut."

The minister was invited to appear before the committee to state his position in the dispute with the Treasury, which seeks to cut the defense budget in order to fund the demands of the protest based on the Trajtenberg Committee's recommendations.

Barak added that the defense establishment was very attentive to the demands raised in the social protest and is certainly willing to contribute its share, even if that means tightening its belt.

"The Treasury is right when it says that the state budget should be maintained like a household. But even a household that is run well, if it has a hole in its roof or if a family member has a serious illness, has to fix the roof or make the person better under the current conditions," he said.