Imposing swift additional sanctions against Iran over its nuclear program would be a "serious mistake," Russian Foreign Minister Sergei Lavrov said on Thursday.

"Today there is a real chance to conclude talks whose results should be an agreement restoring trust in the purely peaceful nature of Iran's nuclear program," Lavrov said in televised remarks.

"Disrupting this chance by demanding swift imposition of sanctions would be a serious mistake," he added.

Iran is due to hold talks with six world powers over its nuclear program on October 1, the outcome of which could determine whether the United States and its allies seek additional sanctions.

Lavrov reiterated Russia's stance that the international community should continue negotiations with Iran and warned that using military action to prevent Tehran from acquiring an atomic bomb would be "catastrophic."

"The problem of the Iranian nuclear program can only be resolved through an all-embracing negotiated solution in a regional context, and not through force," Lavrov said.

"Attempts to use force would have catastrophic effect for the entire Middle East region," he said during a foreign policy address in Moscow.

The United States, the European Union and Israel fear that Iran is secretly building nuclear arms under the guise of its civilian nuclear power program, but Tehran denies the charge and insists the program is peaceful.

Washington and Jerusalem have never ruled out the option of air strikes to destroy Iran's nuclear facilities.

The United Nations Security Council has already imposed three sets of sanctions against Iran over its refusal to freeze its uranium enrichment activities which could be used to build an atomic bomb. 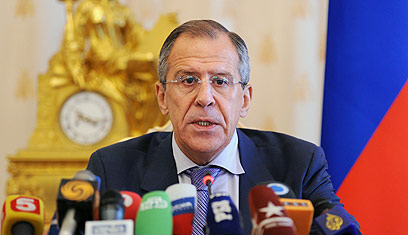 Russia, which is a permanent member of the UN Security Council as well as one of the six powers negotiating with Tehran, has long resisted calls for tougher sanctions against the Islamic Republic over its nuclear program.

Russia is helping build Tehran's first civilian nuclear power plant in the southern Iranian city of Bushehr, and has reportedly agreed to sell its advanced S-300 anti-aircraft missiles to Iran.

Deployment of the missiles around Iran's nuclear facilities would greatly enhance its defenses against an air strike.

A top Israeli politician, Knesset Member Zeev Elkin (Likud), said in an interview published Thursday that delivery of the S-300s to Iran could compel the Jewish state to attack.

"The anti-aircraft missiles would greatly complicate or make impossible a military solution, and thus could push Israel to act much sooner than it would in the current conditions," Elkin, head of the Likud party's group in the Knesset, told Russia's Kommersant daily.