Another round of sanctions? Ahmadinejad
Photo: AP

Iran has worked on developing a nuclear weapon design and other research and testing relevant for such arms, the UN atomic agency said in its most detailed report to date pointing to military dimensions to Tehran's nuclear program.

'No 'smoking gun' in IAEA report on Iran'

The report was distributed to the 35 members of IAEA and to the United Nations Security Council, while parts of it were obtained by news agencies.

"The agency has serious concerns regarding possible military dimensions to Iran's nuclear program," the IAEA said in the report, which included a 13-page annex with key technical descriptions of research.

Citing "credible" information, the Vienna-based agency said the data "indicates that Iran has carried out activities relevant to the development of a nuclear explosive device." 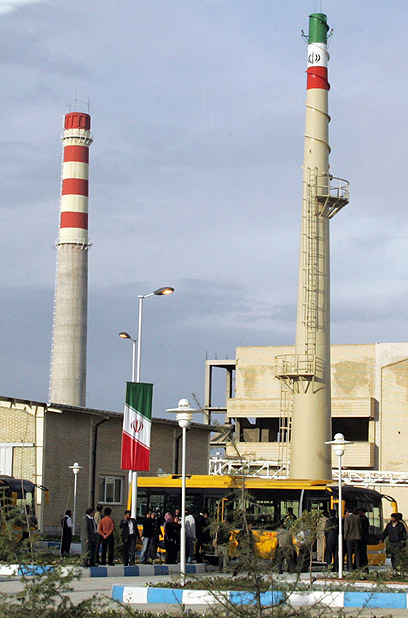 It added: "The information also indicates that prior to the end of 2003, these activities took place under a structured programme, and that some activities may still be ongoing.

The report also stated that Iran has benefited from the help "of a clandestine nuclear network,"  corresponding to news that a Russian scientist and Pakistani experts have lent a hand to Tehran.

Iran's official news agency IRNA stated that the findings "repeat the Zionist regime's claims," adding that the document, which was supposed to remain confidential, "was given ahead of time to media outlets and American government officials. "Publishing satellite images of suspicious facilities as damning evidence proves that this report was conducted without proper evidence in order to fit to the American's worldview," the news agency, which is considered the Iranian regime's mouthpiece, stated.

The US State Department on Tuesday said it needed time to the report and declined to make any immediate comment on its contents.

"This was released to member states about an hour ago so we're going to take some time to look at it before commenting," State Department spokeswoman Victoria Nuland told a news briefing.

"We are not prepared to talk about any next steps at this point."

'More sanctions, but not on oil'

However, a US official said on Tuesday that Washington may impose more sanctions on Iran, possibly on commercial banks or front companies, but is unlikely to go after its oil and gas sector or its central bank for now,

"I think you will see bilateral sanctions increasing," the official, speaking on condition of anonymity, said after the report's release.

"From our side, we are really looking to close loopholes wherever they may exist," he added, noting that US sanctions are so comprehensive that "there is not a whole lot out there other than the oil and gas market and you know how sensitive that is."

"I don't think we are there yet," he added, referring to the possibility of the United States seeking via US sanctions to make it harder for Iran to export oil and gas, the mainstay of the Islamic Republic's economy.

The official also played down the chances of sanctioning Iran's central bank, which is the clearinghouse for much of its petroleum trade with the rest of the world and which Washington recently suggested was a possibility.

"That is off the table (for now)," said the US official. "That could change, depending on what other players (think). I don't want to rule that out, but it is not really currently on the table."

Meanwhile, Russia criticized the release of the report on, saying it would reduce hopes for dialogue with Tehran and suggesting it was aimed to scuttle the chances for a diplomatic solution.

"We have serious doubts about the justification for steps to reveal contents of the report to a broad public, primarily because it is precisely now that certain chances for the renewal of dialogue between the 'sextet' of international mediators and Tehran have begun to appear," the Russian Foreign Ministry said in a statement.

It said time was needed to study the report and determine whether it contained new evidence of a military element in Iran's nuclear program or was nothing but "the intentional – and counterproductive – whipping up of emotions".

AP, Reuters and AFP contributed to this report