November shaping up to be bloodiest month in Syria's uprising; Regime bolsters efforts to close isolate itself in face of mounting international pressure

Syrians snatched from their homes turn up dead, often mutilated. Soldiers gun down former comrades who defected to the opposition. A human rights group reports that electric shocks and hot iron rods are used to torture detainees.

November is shaping up to be the bloodiest month yet in Syria's 8-month-old uprising. More than 250 Syrian civilians have been killed in the past 11 days as the regime besieges the renegade city of Homs and the conflict takes a dangerous turn, stoking fears of civil war.

The UN estimates some 3,500 people have been killed in the crackdown since mid-March, when the uprising began. The latest figures would push that number closer to 4,000.

The bloodshed has spiked dramatically in recent weeks amid signs that more protesters are taking up arms to protect themselves, changing the face of what has been a largely peaceful movement. Many fear the change plays directly into the hands of the regime by giving the military a pretext to crack down with increasing force. 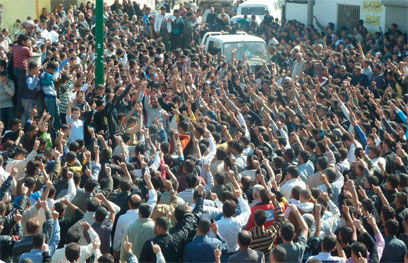 There also have been reports of intense battles between soldiers and army defectors, setting the stage for even more bloodshed. Although the crackdown has led to broad international isolation, President Bashar Assad appears to have a firm grip on power.

The most serious violence has been in Homs, the epicenter of the uprising, which the regime has been fighting to contain all month.

"We have seen urban warfare in some areas where army defections occurred," said Hozan Ibrahim, a spokesman for the Local Coordination Committees, an activist coalition. "The soldiers are having a hard time advancing. They often come under attack from the defectors and this explains why they are shooting more."

He said the regime is more often using tanks, machine guns and rocket-propelled grenades, because they are fighting army defectors as well as the unarmed protesters.

Syria has largely sealed off the country from foreign journalists and prevented independent reporting, making it difficult to confirm events on the ground. In a desperate measure, the regime has begun planting land mines along parts of its border with Lebanon, further closing itself off from the world and showing just how deeply shaken Assad's regime has become. 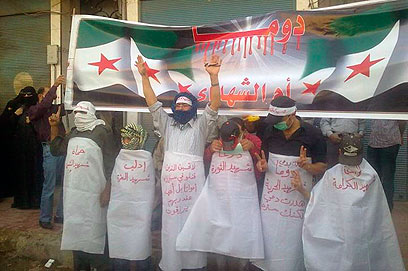 An Associated Press journalist saw Syrian soldiers planting more mines Friday along the border with Lebanon. A Lebanese man lost his leg Friday after stepping on a mine; another man had a foot amputated on November 1 in a similar accident.

Syria says the mines are aimed at stopping weapons smuggling into the country during the uprising.

However, the verdant hills along the frontier are used by refugees fleeing Syria's military assault and by Syrians who have jobs and families on the Lebanese side. The decision to plant mines – terrifying weapons that often maim their victims if they don't kill them – suggests the regime is trying to contain a crisis that is spinning out of its control.

Mass protests after Friday prayers, followed by swift and deadly crackdowns by security forces, have become a weekly cycle throughout the uprising. On Friday, Syrian security forces opened fire on protesters and conducted sweeping raids that killed at least 16 people in Homs and elsewhere in the country, activists said.

The toll adds to a shockingly bloody November.

The Local Coordination Committees said 250 Syrians have been killed since the start of the month, most of them civilians. The British-based Syrian Observatory for Human Rights also documented more than 250 civilian deaths, but reported that 100 soldiers were also killed.

In the absence of firsthand reporting, key sources of information have been amateur videos posted online and details gathered by witnesses and activist groups. Amateur video released Friday by the Shams News Network showed government troops dragging a man's body in the streets of Damascus as fighting raged in the capital a day earlier. Human Rights Watch said in a 63-page report released Friday that Syrian forces have tortured and killed civilians in Homs in an assault that indicates crimes against humanity. The rights group said former detainees reported torture, including security forces' use of heated metal rods, electric shocks and stress positions.

Hozan Ibrahim, the Local Coordination Committees spokesman, said the attack on Homs has been severe, but the regime still has not been able to crush the dissent there.

"The vicious attack on Homs has been relentless," he told the AP. "The martyrs are falling, one after the other."

On Saturday, the Arab League convened an emergency session on Syria after chiding Damascus for its failure to end the bloodshed. Syria agreed last week to a peace plan brokered by the 22-nation league, but the violence only accelerated.

Frustrated protesters across the country called Friday on the Arab League to suspend Syria's membership – a powerful symbolic blow to a nation that prides itself on being a powerhouse of Arab nationalism.

"The people want (Syria's) membership suspended," protesters shouted in Homs and the southern city of Daraa, where the uprising began in mid-March.

The international community is limited in what it can do to help solve the Syrian crisis. NATO has ruled out the kind of military intervention that helped topple Moummar Gaddafi in Libya. Sanctions are chipping away at the regime, but the economy has not collapsed.

The unrest could balloon into a regional disaster. Damascus' web of allegiances extends to Lebanon's powerful Hezbollah movement and Iran's Shiite theocracy. And although Syria sees Israel as the enemy, the countries have held up a fragile truce for years.

Assad already has warned the region will burn if there is any foreign intervention in his country. On Friday, Hezbollah leader Sheikh Hassan Nasrallah backed up Assad and his allies in Iran, saying any war in either country would take down the Middle East.

"Who would dare wage war on Iran? A war on Iran or a war on Syria will not stay in Iran or Syria, but will snowball and engulf the entire region," Nasrallah warned.