In foreign policy debate, presidential hopefuls promise to stop Islamic Republic from developing nuclear weapons, but differ on how to do it

US Republican candidates vowed on Saturday to stop Iran from developing an atomic bomb if they became president but differed over how to do it in a debate that tested their knowledge of world hotspots.

The US economy has been the No. 1 issue for the 2012 campaign, so the CBS News/National Journal debate was a rare opportunity to hear the candidates explain how they would handle the job as commander in chief.

US Republicans: No swaps with terrorists US 'not seeking' confrontation with Iran

None of the eight candidates has much foreign policy experience, save for former US Ambassador to China Jon Huntsman, but they all criticized Democratic President Barack Obama, whom they want to replace in the 2012 election. Former Massachusetts Governor Mitt Romney laid out in stark terms what he would do about Iran's alleged pursuit of nuclear weapons.

'Table is set for war against Israel'

Romney said he would pursue tough economic sanctions and make clear the United States would be willing to go to war to stop Iran from getting a nuclear weapon.

"Look, one thing you can know and that is if we re-elect Barack Obama, Iran will have a nuclear weapon. And if we elect Mitt Romney, if you elect me as the next president, they will not have a nuclear weapon," he said. Romney added that Obama's biggest failure was his handling of the Iranian issue.

The UN nuclear watchdog, the International Atomic Energy Agency, reported on Tuesday that Iran appeared to have worked on designing an atomic bomb and may still be conducting secret research related to building such weapons. Iran says its nuclear ambitions are limited to peaceful electricity generation. 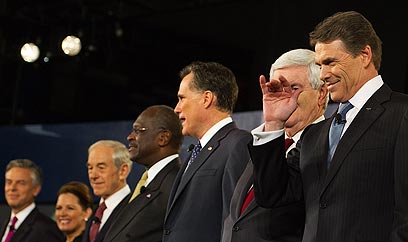 Minnesota Rep. Michele Bachmann warned that Iran's attempt to develop a nuclear weapon is part of a regional push against Israel. She said Iran is working with countries like Syria and groups like Hamas to push its agenda.

That means "the table is being set for worldwide nuclear war against Israel," she said.

Bachmann criticized Obama's approach to managing the US relationship with the Jewish state.

Businessman Herman Cain, happy to be talking about something other than sexual harassment allegations that have dogged him recently, said the only way to stop Iran from a nuclear weapon was through economic means, squeezing Tehran through sanctions and boosting Iran's opposition movement.

He added that he did not believe that the US should take military action to prevent Iran from obtaining a nuclear bomb.

'Not worthwhile to go to war'

Former US House of Representatives Speaker Newt Gingrich, who came to Spartanburg, SC, riding a new wave of support as the conservative alternative to the more moderate Romney, declared he would launch covert operations within Iran in order to be able to deny them later. Gingrich said that if all other steps failed, "you have to take whatever steps are necessary" to prevent the Islamic regime from gaining a nuclear weapon.

Texas Rep. Ron Paul wanted no part of a military strike. "It's not worthwhile to go to war," he said. He added said that if America's security is threatened the president must ask Congress for a formal declaration of war before taking military action.

Texas Governor Rick Perry responded without specifying whether he would support a pre-emptive strike on Iran. "This country can sanction the Iranian central bank right now and shut down that country's economy, and that's what the president needs to do," he said.

US to cut foreign aid?

Another Saturday debate raised the issue of foreign aid. Republican candidates said that US foreign aid must be reexamined in light of the financial crisis.

Chairman of the National Democratic Party, Congresswoman Debbie Wasserman Schultz fiercely criticized such proposals accusing the candidates of lack of responsibility which could endanger Israel.

"Tea Party" members called to revoke all foreign aid over the financial crisis. Nevertheless, there were no reports of concrete plans by the administration or leading presidential candidates (other than Ron Paul) to compromise aid to Israel.

Reuters, AP and Yitzhak Benhorin contributed to the report