US blog: Mossad behind Iran blast

US blogger Richard Silverstein said Saturday that Israel was the mastermind behind the blast the killed at least 17 people at an Iranian Revolutionary Guard Corps base near Tehran.

In his blog, Tikun Olam, Silverstein quotes an Israeli expert as saying that the Mossad was responsible for the explosion, in collaboration with the Iranian militant opposition group Mojahedin-e-Khalq.

Did blast hit Iran missile base? Iran blast: 17 killed in military base

"It is widely known within intelligence circles that the Israelis use the MEK for varied acts of espionage and terror ranging from fraudulent Iranian memos alleging work on nuclear trigger devices to assassinations of nuclear scientists and bombings of sensitive military installations," Silverstein said.

He attributed an incident similar to Saturday's explosion which occurred at a different IRGC missile base last year to Mossad sabotage. 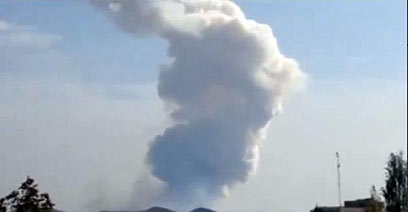 Explosion that killed 17 on Saturday (Photo: Reuters)
Silverstein noted that his source "has never been wrong so far in the reports he’s offered."

Meanwhile, a former IRGC soldier said that the explosion occurred at military storage facility where Shihab missiles are stored. Hamed Ebrahimi, who served at the base for two months, told the Iranian online daily Rooz that the tough security at the facility makes it highly unlikely that the blast was caused by an act of external interference.

The soldier said that the base is split into two divisions; one stores missiles, while the other serves as an air force training center.

A senior IRGC officer was among the massive blast's victims. The officer, identified as Hassan Tehrani Moqaddam, held a rank parallel to brigadier general, the Fars news agency said. He reportedly served as a researcher at a Tehran university and headed the "Jihad Self-Reliance" unit, mostly tasked with developing arms and missiles following the embargo imposed on Iran since 1979.

The explosion occurred 40 km (25 miles) outside Tehran, and was felt in the capital. The IRGC ruled out the possibility that deliberate sabotage was behind the flare-up. On Saturday, it was reported that the blast occurred while munitions were being moved.

"The primary cause for the explosion is being determined, and will be made public at a later date," IRGC spokesman Ramezan Sharif said, stressing that the 17 people who died in the incident and the 16 who were injured were all IRGC operatives, and not civilians.

The funeral procession for the victims has been scheduled for Monday, and is to leave the IRGC's headquarters in Tehran.