"The government has launched a comprehensive assault on democracy, led not by Knesset members from the margins of the right wing but by the prime minister," Knesset Member Dov Khenin (Hadash) said. "Netanyahu understands that a large part of the public opposes his policies. His best defense is offense, and his is attacking. He is changing the fundamental rules of democracy."

Monday's session focused first on several unsuccessful no confidence motions raised against the government, and then moved on to discussions of two bills. The first bill calls for the automatic appointment of the Bar Association president to the state's judge selection committee, while the other, dubbed the Grunis bill, calls for the reduction of the Supreme Court presidential term from three years to two. 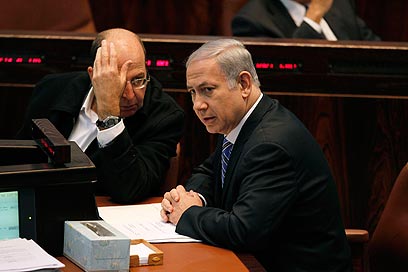 Both bills have been criticized as rightist attempts to curb Israel's judicial system. Notably, both PM Netanyahu and Defense Minister Ehud Barak chose to stay away from the Knesset and not face the criticism or take part in the vote.

Addressing the bills, both propped up by the Right, Mofaz said that "The prime minister is trying to deepen the political control that is threatening independent judgment in Israel. He is abusing the law enforcement branches as if they were the enemies of the regime." Mofaz, an Opposition member, claimed during the session that Netanyahu is scared of Defense Minister Avigdor Lieberman. "A government that is sure of itself does not employ the ways of dark regimes," Mofaz warned, calling on the prime minster to stop "lecturing (IDF Chief of Staff Gabi) Ashkenazi and terrorizing (former Mossad head Meir) Dagan."

Turning attention to a new slander bill that is being pushed through the legislative process, Mofaz said that "The prime minister is trying to silence the media. This is a law to muzzle people."

MK Yoel Hasson (Kadima) also blasted the government during the Knesset plenum session. "If you're so sure in your governance, what's compelling you to pile up such extreme legislation?" he asked.

"The majority is enlightened, and it knows that you are leading us into darkness," Hasson said.

Opposition Leader Tzipi Livni voiced Mofaz's accusations earlier during a special press conference Monday, saying that Netayahu is trying "to turn the State of Israel into a kind of Feiglin-style dictatorship."

"There is an attempt to change the State of Israel, this is what Netanyahu wants to do," she said. "We have a prime minister who is afraid of criticism and is dealing with survival."

Prior to the session, Defense Minister Ehud Barak spoke out against the proposal that aims to change the makeup of the Judge selection committee.

"We bear witness to bills that aim to compromise the Supreme Court and the independence of the judges," he said.

Labor Chairman MK Shelly Yachimovich voiced her opposition to the bill as well.

"If Prime Minister Netanyahu doesn't want to be remembered as the enemy of the rule of law, he must immediately block the flow of bills and measures that, when combined, make for an unprecedented assault on the courts, the media and any other institution identified with the protection of democracy," she said.

"There is no threat, not harm, just the strengthening of Democracy," he said.

Steinitz said that the Kadima MKs were hypocritical in their criticism, claiming that they voiced no opposition while former Justice Minister Daniel Friedman berated "the judicial system as though he poses a threat to it."

Likud addressed the issue in an official statement: "Livni would better explain why she kept silent when her fellow minister Daniel Friedman ceaselessly attacked the Supreme Court."

Attila Somfalvi and Aviad Glickman contributed to this report