Palestinians accompanied by hoards of journalists attempt to enter Jerusalem by bus without permits, detained by security forces

The six activists, joined by dozens of reporters, boarded the bus in the West Bank for a half-hour ride to Jerusalem. When they reached the outskirts, Israeli forces stopped them because they did not have permits to enter Jerusalem. The activists refused to get off the bus. 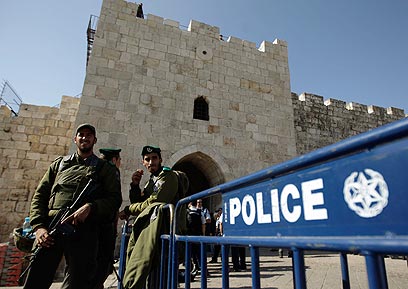 Jerusalem police spokesman Shmuel Ben-Ruby said police arrested the five and took them to police headquarters in Jerusalem. Witnesses said the activists were dragged off the bus.

Activist Nadin Sharabit said he wanted to draw attention to Israeli travel restrictions in the West Bank. He said Jewish settlers move in and out of Jerusalem, but Palestinians cannot do the same.

Israel has restricted Palestinian access to Jerusalem since a Palestinian uprising that started in 2000, including several bloody suicide bombings in the city. The Palestinians claim Israeli-controlled east Jerusalem as their capital.

The Palestinian activists dubbed themselves "Freedom Riders" after 1960s American civil rights activists who worked in the US south to counter racial discrimination and segregation there, though there were no security elements in the American rights struggle.

An Israeli security official said there are "proper channels" to get permits, and that the restrictions "were imposed due to security concerns." He spoke on condition of anonymity because no formal statement was made.