A group of female Knesset members signed a petition Wednesday calling on President Shimon Peres not to pardon Moshe Katsav, this just several days after the Supreme Court upheld the rape convictions against the former president and ruled that he will begin serving his seven-year jail sentence in several weeks.

In the petition, sent to Peres, the MKs stated that "in recent days, following the (court's) rejection of the appeal submitted by former president Moshe Katsav against his rape convictions, Katsav has been conducting a media campaign, which seems to be laying the groundwork for a public atmosphere favorable to pardoning him and exempting him from the punishment he was given.

"We are saddened and ashamed that public figures from different public sectors are also taking part in this campaign." 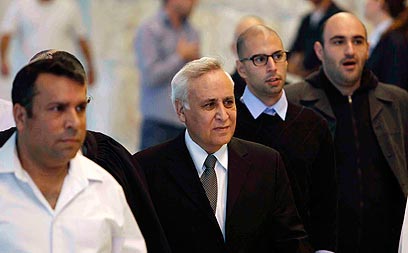 Moshe Katsav leaves court after appeal (Photo: Reuters )
"Being female Knesset Members, who, among other things, represent women in Israel, we express our vigorous objection to this shameful campaign. Pardoning a president who took advantage of his authority and committed rape will be a mark of disgrace on the entire Israeli society and its attitude towards women."

"If a president convicted of two rape charges will not go to jail for his actions, it will be a dark chapter in the rule of law in Israel, another blow to women who fell victim to his actions, and a significant blow to women's claim to complete autonomy over their bodies."

'No plan to commit suicide'

Earlier Wednesday Katsav admitted he is a "wreck" but vowed not to commit suicide. Katsav for the first time apologized to the women who complained against him in an interview published Wednesday morning in the Yedioth Ahronoth daily.

Following rumors that he had taken his own life, Katsav stressed: "I did not commit suicide and have no plans to do so. These are empty statements made by wicked people."

Almost whispering, he added: "I promise my family that I will be strong, but even iron hit as many times as I have been hit in the past five years – eventually bends."

Three weeks before he is scheduled to begin his jail term, the president expressed some regret. "I apologize to the women who complained against me if I hurt them in any way."

With tears in his eyes, he promised: "I will continue fighting for my innocence. The truth will come out – even if it happens after my death."