WASHINGTON – Confidential files released for publication in the United States on Friday reveal a new side to the Jewish-American politician Henry Kissinger, which might anger the Jewish community.

Kissinger, who served as the United States National Security Advisor and later as Secretary of State in the administrations of Presidents Richard Nixon and Gerald Ford, had demanded to divide the Sinai Peninsula into "security zones" prior to the Yom Kippur War in 1973.

According to the secret documents released by the State Department, back in 1972 Kissinger wished to put economic and ethical pressure on Israel, calling American Jewish groups lobbying the Nixon White House self-serving "bastards." 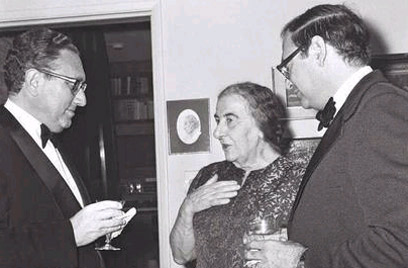 Kissinger meets with PM Golda Meir. Photo: Moshe Milner, GPO
The files also show that Russia had claimed the "Arabs" were willing to recognize the State of Israel at that time. Kissinger had a huge impact on American foreign policy, helping reach certain degree of conciliation between Washington and Moscow during the cold war. As the relations between both countries grew warmer, the Jewish American lobbyists amped up the pressure on Washington in an attempt to aid their Soviet brothers. One of Nixon's advisors, Leonard Garment, reported he was flooded with letters and phone calls from Jews and asked for Kissinger's advice on the matter. According to the transcripts, Kissinger, who is Jewish, replied to Garment: “Is there a more self-serving group of people than the Jewish community?” In response, Garment, also Jewish, said: “None in the world.” Kissinger responded: “What the hell do they think they are accomplishing? You can’t even tell bastards anything in confidence because they’ll leak it.” 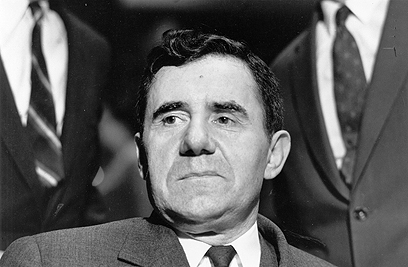 Former Soviet Foreign Minster Andrei Gromyko (Photo: Gettyimages)
Despite these remarks, Kissinger said he would bring up the issue during his meeting with Soviet Ambassador Anatoly Dobrynin and also meet again with Jewish leaders. "They ought to remember what this administration has done,” he added.

The State Department documents also reveal that a year before the Yom Kippur War, Kissinger had suggested to divide the Sinai Peninsula into "security zones" between Israel and Egypt as part of a temporary agreement. He spoke of the issue during his meetings with the Soviet Foreign Minster Andrei Gromyko.

Gromyko had demanded the US force Israel to return to 1967 borders and resolve the Palestinian issue. Kissinger warned that this all or nothing policy plays into the hands of the Israeli government. The US was willing to pressure Israel economically, but had refused to any military sanctions or any kind of commitment to the United Nations. During one particular meeting between Kissinger and Gromyko in Washington, on October 2 1972, the two discussed the matter further.

"Our view is that it is important to make an initial major step with respect to Egypt," said Kissinger. "The longer it stays the way it is, the harder it will be... Without a final determination, we should approach the problem from a standpoint of security, of security zones, without raising the issue of sovereignty. 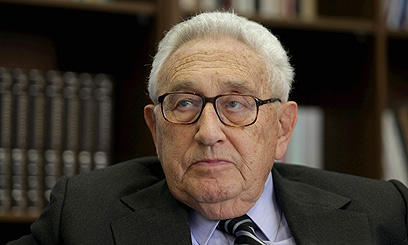 "For example, the notion that Egyptian sovereignty extends up to the 1967 borders but for a certain period the Sinai will be divided into zones—one zone where both sides can station their forces, other zones where there can be some patrolling but no stationed forces, and maybe a buffer zone between them. Thus, for example, Sinai could be divided into five regions. In that event Egyptian civil administration would extend immediately to the borders."

accept this without massive pressure. If it is conceivable we could perhaps apply something like it to the Golan Heights. The major problem is to get some movement, or else the situation will be frozen so

no movement can ever get started. Once movement starts, other pressures can continue to work."

Gromyko replied: "The Suez Canal cannot be separated from withdrawal and the Palestinian

Kissinger: We would like to separate out the question of the Canal, but I see that the others are related to each other.

"But in my view the only justified solution is one all sides can accept. We would like to make progress towards a settlement. If it can be achieved only by a global approach, we will consider a global approach. Our view up to now, which has not changed, is that we should see if we can get a settlement on the Suez Canal first."