Rights group accuses Egypt's rulers of brutality exceeding that of former president Hosni Mubarak, saying the hopes of protesters had been 'crushed'

Recent crackdowns on dissent, including demonstrations in Cairo's Tahrir Square over the past few days, had led to many deaths and injuries, it added.

Clashes renew in Cairo; 22 dead Israeli ambassador back in Egypt

In a report, Amnesty said military courts had tried thousands of civilians and emergency law had been extended. Torture had continued in army custody, and there were consistent reports of security forces employing armed "thugs" to attack protesters, it added. 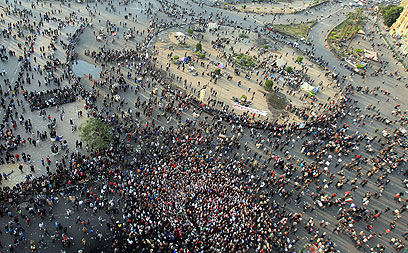 "The SCAF has continued the tradition of repressive rule which the January 25 demonstrators fought so hard to get rid of," said Philip Luther, Amnesty's Middle East and North Africa acting director.

"Those who have challenged or criticize the military council - like demonstrators, journalists, bloggers, striking workers - have been ruthlessly suppressed in an attempt at silencing their voices ... The brutal and heavy-handed response to protests in the last few days bears all the hallmarks of the Mubarak era."

By August, Amnesty said the military council admitted about 12,000 civilians had been tried by military courts and at least 13 sentenced to death. The trials were "grossly unfair", said the rights group.

Charges against demonstrators included "thuggery", "breaking the curfew", "damaging property" and "insulting the army". Allegations of army abuse seemed to have been largely ignored, the report said.

"Amnesty International found ... that the military council had met few of the commitments it made in its many public statements and had worsened the situation in some areas," the group said in its press release.

It said journalists and broadcasters had been summoned to military prosecutors an attempt to suppress negative reporting. Military pressure had also led to a number of current affairs shows being cancelled, it reported.

"The Egyptian military cannot keep using security as an excuse to keep the same old practices that we saw under President Mubarak," said Amnesty's Luther.

"If there is to be an effective transition to the new Egypt that protesters have been demanding, the SCAF must release their grip on freedom of expression, association and assembly, lift the state of emergency and stop trying civilians in military courts."