After six days of violence that has killed more than 30 and four days before voting for parliament begins, there was no sign of an end to the confrontation between Egypt's military rulers and liberals keen to complete a revolt that ousted Hosni Mubarak in February by installing an interim civilian administration.

In the relative calm of the tents and aid stations set up by the mostly young demonstrators at the center of the square, some spoke of several deaths on Wednesday from gunfire or gas, but the accounts could not be reconciled or confirmed. The army had made no move to clear Tahrir, a bastion of the Arab Spring.

Despite concessions on Tuesday by Field Marshal Mohamed Hussein Tantawi and the Supreme Council of the Armed Forces – a presidential election next year, six months sooner than planned, a new interim government and a commitment to allow the free vote for parliament – the demonstrators have not been satisfied.

They see Tantawi's deal, struck with politicians including the Islamist Muslim Brotherhood that expects to do well in the coming polls, as a ploy to stall civilian control and, some argue, to maintain the army's vast economic interests.

The numbers involved, however – thousands in Cairo and other cities – are far short of the millions who rallied against the stagnation and corruption of Mubarak's 30 years. The fellow generals who edged him aside seem to reckon most Egyptians will prefer to maintain a six-decade-old habit of military rule at least until a presidential election they have now set for June.

In late afternoon, police – long objects of fear and dislike for Egyptians compared to soldiers, who command respect – pulled back from positions around the Interior Ministry a couple of blocks from the square. It seemed an effort to calm tension. 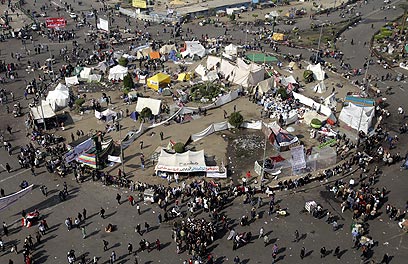 But clashes erupted after nightfall as the security forces spray tear gas on stone-throwing demonstrators and fired guns into the air. Protesters stampeded back towards Tahrir Square.

Ambulances, sirens wailing, ferried casualties away while smoke billowed over the area from fires lit by youths.

Gunfire rang out repeatedly, fuel-filled bottles erupted in flames and riot police filled the street in front of their main position with round after round of tear gas, driving protesters, coughing, into side streets. Every so often, the demonstrators regrouped and would again edge towards the ministry.

Several people gave accounts of people shot dead but these could not immediately be verified. At a makeshift clinic, doctor Tarek Salem said four people had died there on Wednesday, two from bullet wounds and two from asphyxiation.

Vendors on the square were still selling everything from snacks to face masks for protection against wafting tear gas. Fatihia Abdul Ezz, a 60-year-old woman, said she had come to the square for the first time after seeing images of violence. 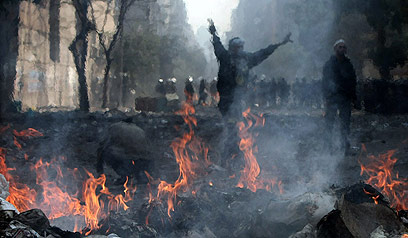 "They were with Mubarak from the start," she said of Tantawi and his colleagues. "I came when I saw our sons being killed."

Protesters unfurled a huge sign denouncing Tantawi, who was Mubarak's defense minister for two decades, and his deputy Sami Enan, along with the rest of the ruling SCAF military council.

"Down, down with military rule. We the people are the red line. The people want to bring down the field marshal, Sami Enan and the military council," it read.

One man walked around the square holding aloft 10 spent tear gas shells, along with cartridge casings threaded on a string.

The overall death toll has reached 38 by a Reuters count after a man was killed in Alexandria and another died in what the state news agency MENA said was an attack on a police station in the northern town of Marsa Matrouh.

The Health Ministry said 32 people had been killed and 2,000 wounded in disturbances across the country of 80 million.