The Jerusalem District Court sentenced Kifah Ghneimat, one of the convicted murderers of American tourist Kristine Luken, to two life sentences and 60 years behind bars on Thursday. A second defendant, Ibrahim Ghneimat, received a life sentence and 16 additional years in prison for the murder of Neta Blatt-Sorek near Beit Shemesh. While touring mountains outside Jerusalem with her friend last December, Luken was brutally murdered by a Palestinian cell.

Luken's friend and tour guide, Kaye Susan Wilson, who was almost killed herself, applauded the ruling and joined by Luken's parents shouted: "Am yisrael chai!"

In their sentencing the judges wrote of Kifah Ghneimat: "These words cannot express the wickedness and cruelty of this defendant, who did not come searching for livelihood and it's doubtful he was seeking revenge, but was just evil for the sake of being evil, cruel and apathetic to his fellowman, as he stabbed two helpless women to death and slaughtered with a large knife, cutting other people and doing such things for months.

"The cries of the victims echo not only in our imagination but are also heard in the family members' immense suffering." 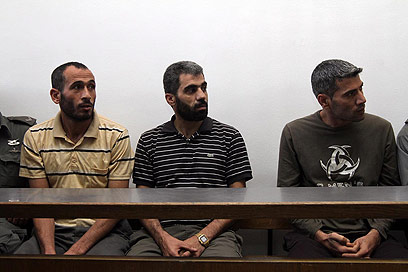 Palestinian cell members in court Thursday (Photo: Gil Yohanan)
As for Ibrahim Ghneimat, the court wrote that his behavior was cruel, evil and lacking conscience. Several months ago Ghneimat, the leader of a Palestinian cell responsible for multipute crimes over the years, was convicted of four murder attempts, robbery, theft, arms dealing, breaking and entering and causing great bodily harm. Luken's body was discovered at a forest near Jerusalem in late December 2010, near the road connecting Beit Shemesh and Moshav Mata. A month later police said they uncovered a Palestinian cell responsible for the murder of the American tourist.

During the investigation, the cell members confessed to Luken's murder, as well as to the murder of Neta Sorek of Zikhron Ya'akov, whose body was found in February 2010 near the Beit Jamal Monastery outside Jerusalem.

An indictment was filed against four of the cell members, who were charged with murder, attempted murder and rape.

'He pulled a large knife'

It was thanks to Wilson that the murderous gang was caught. In September she described the incident before the court and burst out crying.

"Kristine and I went walking in the forest," she recounted. "We walked up to a vantage point and sat on a rock. Suddenly we saw two men bending over. I didn't understand what they were doing," Wilson stated. Wilson continued to recount the horrific event before the court. "They began to attack us. I fought back and managed to stab one of them, but then he pulled out a large knife. I saw Kristine trying to fight back. They held us for nearly a half and hour." Later Wilson told the court the defendants separated her from Luken. "They made us get down on our knees… I realized he was going to behead me. I heard Kristine screaming. They attacked us. I saw Kristine murdered before my eyes. She was yelling. I didn't want it to hurt me. I tried to keep silent. It was tough, because the beatings were hard, but I tried to play dead."

At court on Thursday Sorek's mother, Dina Blatt, said: "Justice doesn't bring back our loved ones. I'm sure they'll be released at one point. It's our biggest fear and it frustrates us."