The Arab League approved sweeping economic sanctions on Syria on Sunday over its crackdown on protesters and the Qatari foreign minister said other powers might intervene if Arabs fail to contain the crisis.

The sanctions, including a travel ban on top Syrian officials and a freeze on assets related to President Bashar Assad's government, were approved by 19 of the League's 22 members to be enforced immediately.

The Syrian regime has yet to respond directly to the Arab Leagues decision, but a state-owned television channel called the decision "unprecedented." Meanwhile, hundreds of people gathered in Damascus' central square to protest against the sanctions. The Syrian Arab News Agency reported that a similar rally was being held in the northeastern city of Hasakah.

"All the work that we are doing is to avoid this interference," Sheikh Hamad said, adding that if the international community did not see that Arabs were "serious" he could not guarantee that such action would be avoided.

The sanctions also aim to halt dealings with Syria's central bank and stop investments in Syria, he told a news conference. 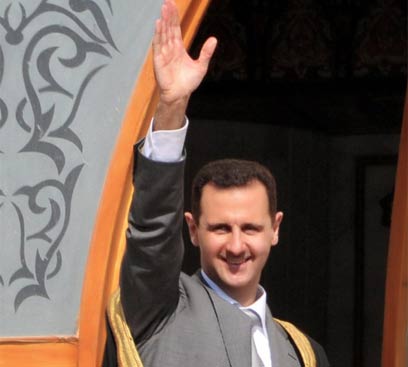 "The funeral came under fire at the mosque when the crowd started chanting 'the people weren't the downfall of the regime'," said one of the activists, who gave his name as Abu Jassem.

In al-Ghab plain, northwest of the city of Hama, troops arrested tens of villagers in the town of Kfar Nbouzeh, burnt six houses belonging to activists and ransacked shops, the Syrian Observatory for Human Rights said.

"Even regular food stores were not spared from the ransacking," said Rami Abdelrahman, the Observatory's director.

The United Nations says the crackdown has killed over 3,500 people. Along with peaceful protests, some of Assad's opponents are fighting back. Army defectors have loosely grouped under the Syrian Free Army and more insurgent attacks on loyalist troops have been reported in the last several weeks.

The defectors are drawn from the majority Sunni rank and file. The military and security apparatus are dominated by officers from Assad's minority Alawite sect, an offshoot of Islam that has controlled the majority Sunni country for the last five decades.

Hundreds of people, including civilians, soldiers and army deserters, have been killed in Syria this month, possibly the bloodiest since the unrest broke out in March inspired by uprisings which overthrew leaders in Tunisia, Egypt and Libya.

Damascus, where the Assad family has ruled for 41 years, says regional powers helped incite the violence, which it blames on armed groups targeting civilians and its security forces.

Non-Arab Turkey's foreign minister, Ahmet Davutoglu, was in Egypt for the Arab ministerial meetings, adding pressure on Damascus from its biggest neighbor.

The stepped-up pressure on Assad follows a French proposal for "humanitarian corridors" to be set up through which food and medicine could be shipped to alleviate civilian suffering.

But United Nations humanitarian coordinator Valerie Amos suggested that setting up humanitarian corridors into Syria or buffer zones on the border could be premature.

British Foreign Secretary William Hague praised the Arab League's move to impose sweeping sanctions against Syria and called for the UN to back up the bloc's decision.

"We welcome the Arab League's leadership in seeking an end to the horrific violence in Syria," said Hague in a statement issued by the Foreign Office (FCO) Sunday. "Today's unprecedented decision to impose sanctions demonstrates that the regime's repeated failure to deliver on its promises will not be ignored and that those who perpetrate these appalling abuses will be held to account," he added.