The Petah Tikva Magistrate's Court on Sunday extended the remand of two of the six teenage girls who, along with another woman, are suspected of damaging army equipment and uprooting olive trees belonging to Palestinians in the West Bank.

Police confirmed that the girls, who are both known right-wing activists, are suspected of infiltrating an IDF base, where they allegedly slashed the tires of army vehicles and spray-painted slogans against the evacuation of West Bank outposts.

The suspicions fall under the category of "nationalistic crime" – the new name given to "price tag" acts. 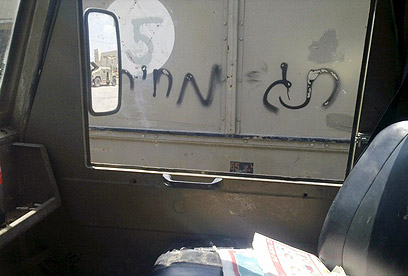 A source who is close to the girls said they have denied any connection to the crimes and said police have no proof linking them to the acts. The girls have been arrested in the past on suspicion of torching a Palestinian vehicle, but they were released after 10 days due to lack of evidence.

The source said one of the suspects had been arrested in the past and placed under house arrest for seven months, but she was released "when it turned out she was framed."

Honenu, an organization which provides legal aid to "Israeli soldiers and civilians in distress," said "if the girls are so dangerous, why were they not arrested all these months? We hope this case will be closed as well, just as many other cases involving 'price tag' suspicions have." The organization is providing legal representation for the suspects.