Republican presidential hopeful Newt Gingrich on Saturday defended his statement that the Palestinians are an "invented" people, brushing aside criticism that he had unnecessarily made the Mideast peace process more difficult.

"Is what I said factually true? Yes," Gingrich said during a candidate debate in which he drew applause for asserting that it was time someone spoke the truth about the nature of Israel's struggle with the Palestinians.

Former Massachusetts Governor Mitt Romney argued during the debate that Gingrich has made it more difficult for Israel and the Palestinians to negotiate toward peace. "That was a mistake, on the speaker's part," Romney said of the interview with The Jewish Channel.

"The United States should not jump ahead of Bibi Netanyahu and say something that makes it more difficult for him to do his job," he added.

The Repblican candidates voiced unwavering support for Israel during the debate, with the exception of Ron Paul, who called for less involvement in the Mideast, saying that the US should “start minding our own business and start bringing all the troops home.” Rick Perry slammed Barak Obama during the debate. He claimed that the US president's policies cause problems in the Middle East, and noted that the US has the capability to deal with Iran.

Gingrich in favor of 2 separate states

Gingrich's remarks to a cable channel the day before struck at the heart of Palestinian sensitivities about the righteousness of their struggle for an independent state and put him at odds not only with the international community but with many in Israel. Mainstream Israelis, including Netanyahu, support the idea of an independent Palestine alongside Israel as part of a final peace agreement.

Before the debate, Gingrich told a veterans' forum that he supports a peace agreement between Israel and the Palestinians that includes two separate states.

The burden to show a willingness to reach a peace accord with the Israelis lies squarely with the Palestinians, he said.

"When the president keeps talking about a peace process while Hamas keeps firing missiles into Israel, if we had a country next to us firing missiles, how eager would we be to sit down and negotiate?" Gingrich told the forum in Iowa. 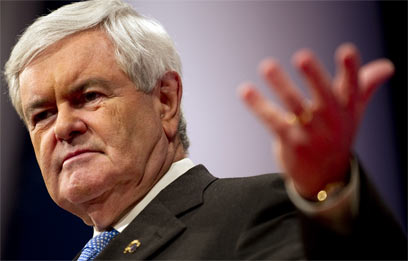 In footage released Friday, the former House speaker told the Jewish Channel, a US cable TV network, that the Palestinians were an "invented people."

"Remember, there was no Palestine as a state – (it was) part of the Ottoman Empire. I think we have an invented Palestinian people who are in fact Arabs and historically part of the Arab community and they had the chance to go many places," Gingrich said according to a video excerpt posted online.

In a statement, Gingrich spokesman R.C. Hammond said that "to understand what is being proposed and negotiated you have to understand decades of complex history – which is exactly what Gingrich was referencing."

"The vast majority of American Jews (including this one) and the Israeli Government itself are committed to a two-state solution in which Israelis and Palestinians live side-by-side as neighbors and in peace," Levin said in a statement. "Gingrich offered no solutions – just a can of gasoline and a match."

And while Gingrich sought to reassert his openness to a two-state solution, which has been the position of Republican and Democratic administrations, he said it was appropriate to discuss the history of the region.

"We have a challenge in the Middle East, and this is one where we're going to have a national debate that's going to be very difficult and that people are going to find at times very frustrating," he told about 100 veterans in a theater near Drake University a few hours before the debate. "We can't have an honest conversation about what's going on in the Middle East, we can't even discuss what the roots of the problem are."