El-Ganzouri acknowledges people died from gunshot wounds, but denies military, police shot at protesters. 'A group came from the back, fired at protesters,' he claimes

Egyptian soldiers clashed with hundreds of rock-throwing protesters in central Cairo for a second consecutive day on Saturday, hurling stones from rooftops and firing water from hoses in a crackdown that has left at least eight people dead.

Egypt's Prime Minister Kamal el-Ganzouri acknowledged that people had died from gunshot wounds, but denied the military and the police fired at protesters instead said "a group came from the back and fired at protesters" and said that his government is for "the salvation of the revolution."

The heavy-handed assault was an attempt to clear out protesters who have been camped out in front of the building for three weeks demanding the ruling military leave power.

El-Ganzouri, a Mubarak-era politician who was named prime minister few days after violent protests broke out last month, blamed demonstrators for fueling the latest clashes by demolishing a wall of the Cabinet building, setting fire to the building and smashing surveillance cameras.

He said that the military forces guarding the building from inside have not been taken part in the clashes.

He added that protesters are not "the pure revolutionaries" he knew, saying "a 12-year old boy can't be a revolutionary."

"I feel very sad and in so much pain," he told reporters in a press conference aired on Egyptian state TV. "I stress here that the armed forces didn't engage with protesters and didn't leave the building."

Soldiers stormed an anti-military protest camp outside Egypt's Cabinet building, beating women with sticks and hurling chunks of concrete and glass onto protesters from the roof of the parliament in a resurgence of turmoil only a day after millions voted in parliamentary elections.

At least eight protesters were shot to death in Friday's clashes, including a prominent Muslim cleric, activists said. The heavy-handed assault was apparently an attempt to clear out protesters who have been camped out in front of the building for three weeks demanding the ruling military leave power.

But the mayhem – which came despite promises from the army-appointed prime minister that no one would try to clear the protesters by force – threatened to spark a new round of violence after deadly clashes between youth revolutionaries and security forces in November that lasted for days and left more than 40 dead.

Several women protesters cowered on the pavement as military police beat them with truncheons and long sticks. Another woman was seen bring dragged away by her hair by soldiers. 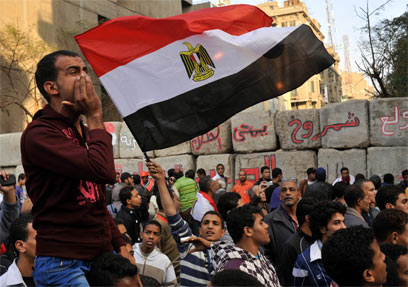 Plainclothes and uniformed security officers were seen throwing slabs of concrete and stones on protesters from atop the parliament building, according to state TV footage and videos and photos posted by protesters on social networking sites. Protesters threw fire bombs and rocks at the security officers, lighting a part of parliament on fire and chanting "Down with the military."

"It's pretty ironic that the military is throwing rocks at protesters from the parliament building, where a sign is hanging that says democracy is the power of the people," protester Mostafa Sheshtawy said.

Hours after sunset, the crowds of protesters had grown to hundreds and clashes continued, with youths hiding behind a makeshift barrier of metal sheets and an overturned car, throwing volleys of stones at military police lined up in the broad avenue in front of the parliament and Cabinet headquarters.

There were reports of live gunfire from the rooftops. One protester, Islam Mohammed, said a fellow protester pushed him aside and was hit by a bullet in the stomach. "He took a bullet instead of me and fell to the ground. I have his blood on my shirt and hands," Mohammed said. The condition of the wounded man was not known.

The Health Ministry said at least 303 people were injured, including broken bones and gunshot wounds.

The assault was likely to re-ignite the tensions between revolutionaries and the military, which took power after the Feb. 11 resignation of Hosni Mubarak. The youth activists who led the protests that ousted Mubarak accuse the military of acting in the same authoritarian way as the former president.

Who has the power?

A number of newly elected lawmakers condemned the military for the violence.

The Muslim Brotherhood, the biggest winner in parliamentary elections so far, said in a statement that it rejects the assault on protesters and the use of the parliament building to attack people.

In a Tweet, leading reform figure and Nobel Peace laureate Mohamed ElBaradei wrote, "If the sit-in broke the law, isn't the cruelty and brutality used to break it up a greater violation of all human rights laws? This is not how nations are managed."