Obama to US Jews: We stand with Israel

US president speaks at Union for Reform Judaism conference, tells Jewish community 'America's commitment and my commitment to security of Israel is unshakeable'

United States President Barack Obama delivered a keynote speech in front of thousands of Jewish Americans Friday at the 71st General Assembly of the Union for Reform Judaism in Washington D.C.   The president quoted from the portion of the week, "Hineni" (Here I am), and added: "Throughout history this place, America, stands out. Jews faced prejudice and violence. But no matter where you came from, you could make it if you try. I know how much this story means to you, because I know how much it means to me.

Israeli officials: Obama too soft on Iran Ross: Obama won't hesitate to use force against Iran

"Your parents, your grandparents remember how it is to be a stranger. They pursued a hard work of Tikkun Olam, because they experienced bigotry. Our country is a better place because they did," Obama told a cheering crowd.

Speaking about the Israeli-Palestinian conflict, Obama said "I know that many of you share my frustrations from time to time. There is so much work to do. But here is what I know - peace can't be imposed from the outside, ultimately Israelis and the Palestinians have to reach agreement on issues that divide them.

"We stand with Israel as a Jewish and democratic state. America's commitment and my commitment to security of Israel is unshakeable," the president stressed, receiving a loud round of applause.

"I said in September at the UN, no nation can tolerate terror or accept rockets targeting innocent women and children. It's hard to remember a time when the administration gave more support to the security of Israel, don't let anyone to tell you otherwise, it's a fact," Obama asserted.

Referring to Iran's nuclear program, Obama repeated his pledge that he would take "no options" off the table when it comes to forcing the Islamic Republic to stop its ambition to acquire weapons of mass destruction.

"We are determined to prevent Iran from acquiring nuclear weapons. And that’s why we’ve worked painstakingly from the moment I took office with allies and partners, and we have imposed the most comprehensive, the hardest-hitting sanctions that the Iranian regime has ever faced…And that’s why, rest assured, we will take no options off the table," he said. 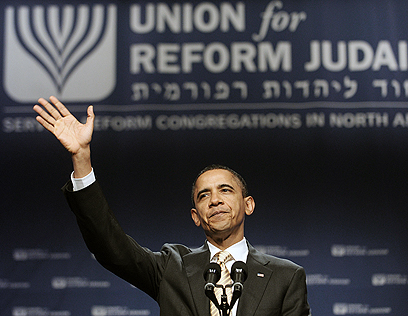 Obama reiterated his administration's unwavering support for the Jewish state, saying "On my watch, the United States of America has led the way, from Durban to the United Nations, against attempts to use international forums to delegitimize Israel. And we will continue to do so. That’s what friends and allies do for each other. So don’t let anybody else tell a different story. We have been there, and we will continue to be there. Those are the facts."

Prior to the speech Defense Minister Ehud Barak, who is visiting Washington, met with Obama. The two discussed different challenges facing the Middle East.

"The defense minister thanked President Obama for deepening and strengthening the security ties between Israel and the United States during his term in office," the Ministry stated.

Obama, who is seeking reelection next year, argues that he has a steadfast relationship with Israel, meeting its defense needs and intervening to help rescue Israeli diplomats caught in a siege in Cairo in September.

The US president also spent diplomatic capital to halt the Palestinian drive for statehood recognition at the United Nations, putting him at odds with several US allies.

But there have been clear differences between the Israeli government and Obama over stalled Middle East peace talks with the Palestinians and settlement building in the West Bank.

Obama's potential Republican opponents in the 2012 election also seized on an overheard conversation he had with French President Nicolas Sarkozy in November, when he appeared to show frustration with Netanyahu.

They have also slammed him for calling earlier this year for peace talks with the Palestinians to be based on Israel's 1967 borders, omitting to say that Obama also called for land swaps to establish final statehood lines.

Obama hit out at the criticism in November, during a campaign fundraiser in New York, professing that "no ally is more important than the state of Israel" and trumpeting his commitment to help safeguard the Jewish state.

"I try not to pat myself too much on the back, but this administration has done more in terms of the security of the state of Israel than any previous administration," the president told donors.

"And that's not just our opinion, that's the opinion of the Israeli government," he said, citing intelligence cooperation and US help for the "Iron Dome" missile shield meant to thwart regular rocket attacks on Israel.