The UN General Assembly granted a request from North Korea to hold a moment of silence Thursday for Kim Jong-il, the country's former leader who died Saturday, though Western envoys said they would boycott it.

Nassir Abdulaziz Al-Nasser, president of the 193-nation General Assembly, said the moment of silence would take place before a meeting of the assembly Thursday.

North Korea's UN mission made a similar request to the UN Security Council, though Western diplomats said it was rejected. 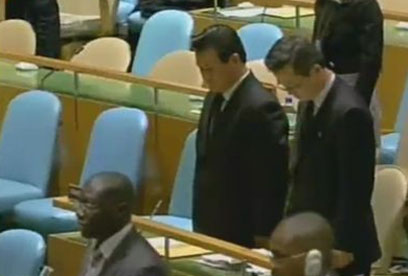 "We didn't think it would be appropriate," a diplomat told Reuters on condition of anonymity.

Several Western diplomats said Pyongyang's request for Kim to be honored was highly unusual. They voiced surprise that Nassir had granted it and added that their delegations would most likely boycott the moment of silence in the assembly.

Speaking at a news conference, Nassir cited "protocol" as the reason for agreeing to the request from North Korea, a full UN member.

Pyongyang is under Security Council sanctions due to Kim Jong-il's nuclear weapons program, which Western officials say ate up huge sums of money that could have been used to help feed North Korea's starving population.

An official at the Czech Republic's UN mission said the Czechs did not request a similar moment of silence for Vaclav Havel, the playwright-turned-dissident who died Sunday.

The former Czech president was the leader of Czechoslovakia's 1989 "Velvet Revolution," in which he oversaw the peaceful transition from communism to democracy.


פרסום ראשון: 12.22.11, 22:23
commentsend to friendshareshare
See all talkbacks Close all talkbacks
new comment
Next
Previous
Warning:
This will delete your current comment
cancelOk