WASHINGTON - A former special adviser on Iran policy to the Obama Administration said that a US-perpetrated strike on the Islamic Republic on is the "least bad" option in dealing with its nuclear threat.

"The truth is that a military strike intended to destroy Iran’s nuclear program, if managed carefully, could spare the region and the world a very real threat and dramatically improve the long-term national security of the United States," Matthew Kroenig, a nuclear security expert at the Council on Foreign Relations who served as a strategist under Defense Secretary Robert Gates, said in an article published by Foreign Affairs Magazine.

Kroenig acknowledged that a military operation in Iran is not an "attractive prospect," but explained that it is within the US' power to minimize the anticipated effects. 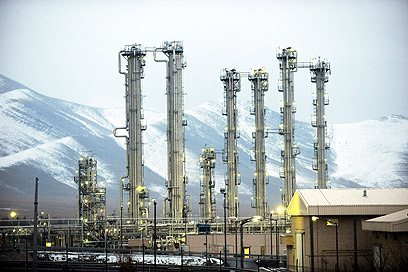 Iranian nuclear plant (Photo: EPA)
"If it does so successfully, it can remove the incentive for other nations in the region to start their own atomic programs and, more broadly, strengthen global nonproliferation by demonstrating that it will use military force to prevent the spread of nuclear weapons," Kroenig wrote.

The former strategist posited that if the US attacks, it could also prevent Israel from perpetrating a strike that is destined to fail.

"Given Israel's limited capability to mitigate a potential battle and inflict lasting damage," Kroenig said, an Israeli strike "would likely result in far more devastating consequences and carry a far lower probability of success than a US attack."

Kroenig warned that waging a cold war against Tehran, aimed at containing its nuclear capabilities, is "a costly, decades-long proposition that would likely still result in grave national security threats." While recognizing the US' reluctance to enter yet another military conflict, Kroenig claimed that a speedy nuclear development in Iran will eventually force it to choose between a conventional confrontation and a nuclear one.

"The United States should conduct a surgical strike on Iran’s nuclear facilities, absorb an inevitable round of retaliation, and then seek to quickly de-escalate the crisis," he concluded. "Addressing the threat now will spare the United States from confronting a far more dangerous situation in the future.”