Residents of southern town finally resume regular routine which doesn't involve running to shelter every 15 seconds. 'Thanks God life is better now,' they say. 'This city is our future'

It is a rainy day in the small, working-class city of Sderot, Israel, located less than two kilometers away from the Gaza Strip. The yellow-painted bomb shelters along with the brightly colored public shelters stand out in the dreary weather. People are hurrying about, trying to escape the rain - and not what was once the typical rain of Qassam rockets that hit the city almost daily.

"Now the rockets pass over us," says Rachel Levy, the owner of a local sewing shop. "Thank God, life is better."

"But the memories are still there," says Levy, originally from Morocco, who has been running her sewing shop for 25 years. 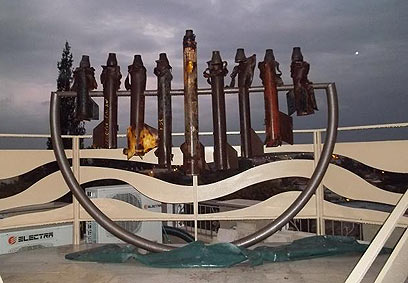 Menorah made of Gaza rockets lit this Hanukkah at the Sderot Hesder Yeshivah (Photo: Anav Silverman)

Levy describes how a Qassam rocket once exploded near her shop six years ago. "I was measuring the hem of a dress for a client at the moment when a rocket exploded out of nowhere. Pieces of shrapnel sprayed into the shop," she recalls. Levy shows me her arm which still bears the signs of the surgery she had to remove the shrapnel that sliced her arm.

"But," Levy says, managing a cheerful smile, "celebrating Hanukkah this year has been a much more joyous occasion." Levy's menorah stands right beside the sewing machine where she works.

Getting back to routine

Sderot mayor, David Buskila, also believes that Sderot residents are in a much better place today than three years ago. "We've been able to get back to a regular routine - a routine that does not involve running to a shelter every 15 seconds and wondering when the next rocket will explode," he said.

"The stress and pressure that comes with living under constant rocket fire has dramatically lessened, at least here in Sderot following Operation Cast Lead in 2009. The economy and housing market has also improved" elaborates Buskila.

"However, living on the border with terrorists who still remain hostile to us, who do not recognize our right to exist does not guarantee this routine will last," affirms Buskila. "We already see how cities with populations much larger than Sderot - Ashkelon, Ashdod and Beersheva, are now under rocket attack.

The calm we have now is not based on a treaty or agreement, and therefore we need to be prepared."

Buskila describes how concrete bomb shelters cover almost every inch of the city. "There are about 6,000 reinforced cement bomb shelters for homes and apartments in addition to 200 public shelters located across Sderot. Children learn in fortified schools and preschools. We even have a fortified indoor playground built by the JNF that can fit 500-600 children. "

Since the Gaza War in 2009, the Israeli government has invested over a hundred million dollars in fortifying the city of Sderot and $1 billion into the Iron Dome defense system set up to intercept rockets fired from Gaza that reach a range of close to one million Israelis in southern Israel.

Sderot Media Center's director, Noam Bedein reports that the city has become an important stop for students, diplomats and government officials. The Center just hosted the Dutch ambassador to Israel.

"People from the outside come to visit the city much more frequently now because it is safer," he said.

"There is so much to learn about Israel through visiting Sderot and seeing up close what residents have been forced to endure. So many families in Sderot were determined to continue living here in spite of the rockets."

Shula Sasson, a Sderot mother of five was one of those determined residents. "There was only one night when I wanted to leave this city," she said. "That was the night when 48 rockets were fired at us in May 2007. I took my kids and left the city for a month, until the war was over."

In addition to that night, Sasson's youngest son, Raziel was injured in a rocket attack on his school when he was nine in 2004. The neighborhood synagogue the Sasson family attends was also struck in a rocket attack in 2007, as was the family's home in 2008.

'This is our home'

But Sasson to this day, can never imagine leaving her beloved community. "My mother, who escaped from Tripoli with her brother in the 1930s and came to Israel with nothing, still lives here in the next street over," explained Shula. "Her seven children, including myself all live here in Sderot and most of the grandchildren also live here."

"This is our home and we love it here," Sasson fervently declares. She is not the only one. 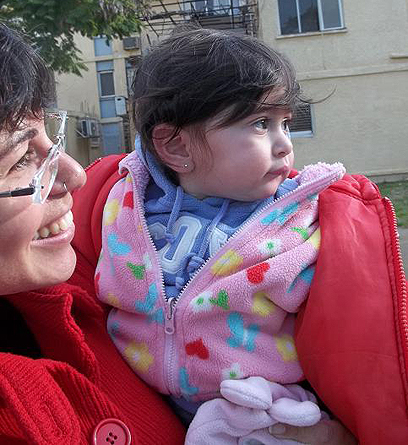 Meital Trebalsi with her one-year-old daughter. 'We want to raise our children in Sderot' (Photo" Anav Silverman)

Meital Trebalsi and her husband, a young couple with a one-year old daughter and another along the way, agree. "Sderot is a good place to raise our children. The people here are friendly and warm, the community is safe. This city is our future," Trebalsi explains, holding her one-year old daughter, Tamar, who is on the way to a Hanukkah party.

A few minutes away, a menorah made of Qassam rockets fired at Sderot, is about to be lit as the rain stops. Located on the rooftop of the local Hesder yeshiva which combines Torah learning with army service for high school graduates from all over Israel, the rocket menorah has come to symbolize the city's own Hanukkah miracle -one where the resilience and faith of a community can overcome difficult times.

Anav Silverman works as the international correspondent for Sderot Media Center and an educator at Hebrew University's Secondary School of Education in Jerusalem.