Hours before rally against women's exclusion in his city, Abutbul ask press 'not to put all haredim in one basket'

"There is no reason on earth for a person to raise a hand - let alone on helpless girls." Beit Shemesh Mayor Moshe Abutbul said Tuesday in reference to Na'ama Margolis, the seven-year-old girl who was spat on by a haredi man who claimed she was not dressed "modestly enough."

Addressing the recent acts of violence against women in his city perpetrated by local ultra-Orthodox, the mayor said "there is no pardon for those who behave provocatively. Rioters should be dealt with a firm hand."

Abutbul spoke to reporters at his office just hours before a mass demonstration is expected to take place in the city against the exclusion of women from the public sphere. "Beith Shemesh denounces such behavior. Violent men belong behind bars. I urge Israel Police to act with a firm hand against all the rioters, and I call on you (the press) not to put all (the ultra-Orthodox) in one basket," the mayor said. 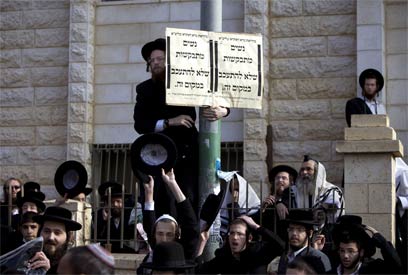 The mayor's office rejected claims that municipality was backing the exclusion of women in the city. City officials mentioned that since Abutbul took office five women – all secular – were appointed to senior positions in the municipality.

"The exclusion of women may exist on some streets or in some neighborhoods, but it has nothing to do with the municipality or its policies," one official said.

Jerusalem Police has completed its preparations for the mass rally, with hundreds of officers being deployed to maintain order and secure the demonstrators.

Mayor Abutbul said he welcomes the protesters to Beit Shemesh "to send a clear message against violence perpetrated by a few (members of the Sicarri sect) who shame the city and all of Israeli society."

On Monday the City of Beit Shemesh announced that it would install between 300 and 400 surveillance cameras throughout the city as part of the effort to curb the growing violence.

However, a city councilman from the opposition said he does not believe the cameras will be installed. "A haredi mayor cannot install such cameras in haredi neighborhoods. This move is purely for show," he said.

Kobi Nahshoni contributed to the report