The United Nations says it's critical that the Syrian government give the Arab League's observer mission unhindered access and its full cooperation as thousands of protesters take to that country's streets to underscore their defiance of the regime.

Martin Nesirky, spokesman for Secretary-General Ban Ki-Moon, said Friday that the league efforts to peacefully resolve the crisis in Syria are important.

Nesirky spoke as a deeply divided Security Council has yet to pass a resolution condemning the violence which the UN says has killed more than 5,000 people.

The nearly 100 Arab League monitors are the first that Syria has allowed into the country during the current uprising that began in March. 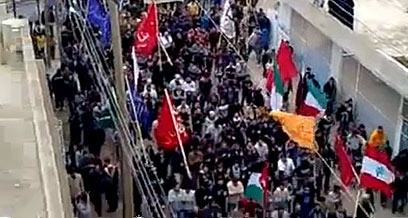 Meanwhile, in the largest protests Syria has seen in months, hundreds of thousands of people took to the streets Friday in a display of defiance to show the Arab League observer mission the strength of the opposition movement.

Despite the monitors' presence in the country, activists said Syrian forces loyal to President Bashar Assad killed at least 22 people, most of them shot during the anti-government demonstrations.

According to reports by al-Arabiya, as many as 43 people died in Friday's violence, including five members of Syria's security forces.

In a further attempt to appeal to the monitors, dissident troops who have broken away from the Syrian army said they have halted attacks on regime forces to reinforce the activists' contention that the uprising against Assad is a peaceful movement.

Ynet contributed to the story