The move is so far the most serious by the fractured opposition to unite against the regime and shows that Assad's opponents will accept nothing less than his departure from power.

Burhan Ghalioun, leader of the Syrian National Council, and Haytham Manna of the National Coordination Body for Democratic Change in Syria, or NCB, signed the draft in Cairo on Friday night, according to an NCB statement and Omar Idilbi of the SNC.

Syria's uprising began in March, inspired by other Arab Spring revolts. The United Nations says more than 5,000 people have died as the government has sought to crush the revolt. 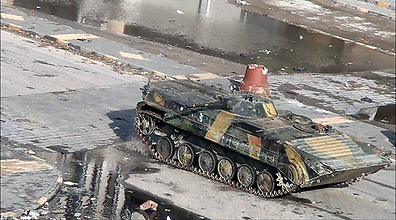 On Tuesday, scores of Arab monitors, who are the first that Syria has allowed into the country during the uprising, began their work on the ground visiting hot spots around the country. They are supposed to ensure the regime complies with terms of the Cairo-based 22-member Arab League's plan to end Assad's crackdown on dissent.

Despite the observers' presence, regime forces have continued the crackdown. At least six people were killed in attacks on protests Saturday, including one in Damascus, according to the Local Coordination Committees, an activist group.

The agreement between the opposition coalitions, a copy of which was obtained by The Associated Press, says both groups reject any foreign military intervention in Syria and call for the protection of civilians by all legitimate means in the framework of international laws.

It also said that as soon as Assad's regime falls a "transitional period" will begin by preserving all state institutions then drafting a new constitution that guarantees a "civilian pluralist parliamentary democratic system." Then elections for a new parliament and president would be held.

The draft also says that all Syrian citizens are equal and the country's Kurdish minority is a "fundamental and historic" part of Syria's national structure. It also calls for "liberating Syrian territory," an apparent reference to the Golan Heights, occupied by Israel since 1967. 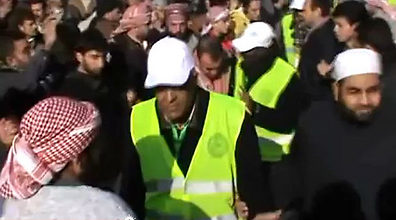 The two umbrella groups, the SNC and NCB, arose after the revolt began in March as activists and the opposition tried to organize their ranks against Assad. The Syria-based head of the NCB, Hassan Abdul-Azim, told the AP that the aim is to have a "united opposition inside and outside the country" making it a more active force.

"The opposition, inside and outside the country, agree that this regime should go and a new democratic system be set up," said Abdul-Azim, one of the most prominent dissidents inside Syria.

His group adopted the draft agreement. The SNC's Ghalioun signed the agreement but the membership of the group must still formally adopt it, though the SNC's Idlibi said he expects that will happen without any changes. The groups said they will hand an official copy to Arab League Secretary General Nabil Elaraby in Cairo on Sunday.

"The agreement is a good step in the right direction toward democracy," said Rami Abdul-Rahman, who head the British-based Syrian Observatory for Human Rights activist group. He added that the agreement gives a boost to people taking part in the protests now that they know the opposition is united.

"The regime used to benefit from divisions among the opposition," Abdul-Rahman said.