Iran defiantly announces it has tested new missile, made an advance in its nuclear program after US unleashes extra sanctions that sent its currency to record low

Iran defiantly announced on Sunday that it had tested a new missile and made an advance in its nuclear program after the United States unleashed extra sanctions that sent its currency to a record low.

The developments raised the stakes in a budding confrontation between the longtime foes, as concerns mounted that Iran could make good on threats to close the world's most important oil route, the Strait of Hormuz, if it is backed into a wall.

Ten days of Iranian naval war games are to climax on Monday with vessels practising "a new tactical formation" to be used to close the strait if so ordered, navy spokesman Commodore Mahmoud Mousavi was quoted as saying by the ISNA news agency.

On Sunday, "for the first time, an anti-radar medium-range missile was successfully fired during the massive naval drills," Mousavi said, according to state media. 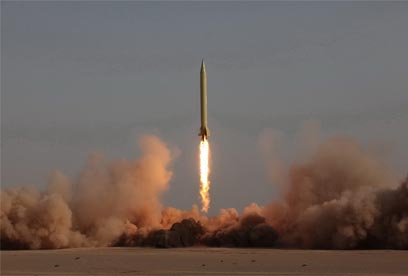 The Iranian Atomic Energy Organisation followed that up with its own announcement that its scientists "tested the first nuclear fuel rod produced from uranium ore deposits inside the country."

The statement suggested Iran had made progress in becoming a self-sufficient nuclear nation and had technological prowess the West thought it lacked.

It also fed into broader Western fears that Iran's real aim is to develop a capability to enrich uranium to the 90% level necessary for a nuclear bomb, an ambition Tehran strongly denies.

Those fears are at the heart of the Western push to halt Iran's nuclear programme through successive sets of sanctions.

Iran's currency, the rial, slipped to a record low Sunday on that news.

The state news agency IRNA and an Iranian website tracking the currency said it slid to around 16,000 to the dollar.

Iranian President Mahmoud Ahmadinejad told an annual meeting of senior central bank officials that their institution was "the backbone of dealing with the enemies' pressure."

He said the bank "must with strength and self-confidence have the solidity to eliminate all of the enemies' plots," according to a statement on the presidency website.

Ahmadinejad said that "currently there is no particular problem in the economic sector."

The extra US sanctions aim to further squeeze Iran's crucial oil sales, most of which are processed by the central bank. They will make foreign firms choose between doing business with the Islamic republic or the economically mighty United States.

Iran, the second-biggest producer in OPEC after Saudi Arabia, depends on oil sales for 80 percent of its foreign currency earnings.

The European Union is also mulling an embargo on Iranian oil purchases, and a decision could be announced at an EU foreign ministers' meeting at the end of the month.

Iranian leaders and military officials have warned that additional Western sanctions could push them to close the strategic Strait of Hormuz at the entrance to the Gulf.

Those warnings became more strident in recent days, with Vice President Mohammad Reza Rahimi vowing last Tuesday that "not a drop of oil will pass through the Strait of Hormuz" if more sanctions were imposed.

Oil prices spiked on that declaration, before subsiding somewhat on analysts' views that Iran would devastate its own economy by taking such a drastic step. It would also lose the international diplomatic protection it enjoys from Russia and China, they said.

Twenty percent of the world's oil passes through the Strait of Hormuz, making it the "most important choke point" globally, according to the US Energy Information Administration.