President Barack Obama vowed Thursday the United States will remain the world's pre-eminent military power even as the Pentagon scales back spending, shrinks the Army and Marine Corps and pulls back from Europe, giving Asia a higher priority.

In a rare appearance at the Pentagon, Obama spoke as the military released a strategy that summarizes changes planned in how the military will operate in an era of budget cuts that will amount to billions of dollars. 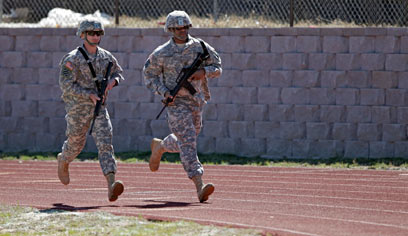 What lies ahead for US military? (Photo: AP)

Obama said the US is "turning a page" after having killed al-Qaeda leader Osama bin Laden, withdrawn troops from Iraq and begun to wind down the war in Afghanistan. He outlined a vision for the future that would ensure an uncompromised US military strength operating with less money.

Obama announced no new capabilities or defense initiatives. He described a US force that will retain much of its recent focus, with the exception of fighting a large-scale, prolonged conflict like the newly ended Iraq mission or the continuing war in Afghanistan.

His presentation strongly suggests a reduced US military role in Europe, notwithstanding a continuing close relationship with NATO, and says Asia will be a bigger priority. It also emphasizes improving US capabilities in the areas of cyber warfare, missile defense, intelligence, surveillance and reconnaissance.

"Our military will be leaner, but the world must know the United States is going to maintain our military superiority," Obama said, with Defense Secretary Leon Panetta and the Joint Chiefs of Staff chairman Gen. Martin Dempsey at his side.

US military to be reshaped

Obama said his administration would not repeat the mistakes made after World War II and Vietnam when defense reductions left the military ill-prepared.

"As commander in chief, I will not let that happen again," he said. "Not on my watch."

The president announced that the military will be reshaped over time with an emphasis on countering terrorism, maintaining a nuclear deterrent, protecting the US homeland, and "deterring and defeating aggression by any potential adversary."

The new strategy moves the US further from its longstanding goal of being able to successfully fight two major regional wars - like the 1991 Gulf War to evict Iraqi forces from Kuwait or a theoretical ground war in Korea - at the same time.