Ayalon hints at aggressive Israeli reaction to online leak of credit card numbers belonging to thousands of Israelis. 'US announced that any attack on its cybernetic space would be considered a declaration of war,' he tells cultural forum

After an Israeli student claimed to have uncovered the identity of a hacker who leaked the personal details of thousands of Israelis, Deputy Foreign Minister Danny Ayalon said Israel will view such cyber attacks as "acts of terror" and will "retaliate forcefully against hackers who undermine Israel's cybernetic sovereignty."

Speaking at a cultural forum in Beersheba Saturday morning, Ayalon said Israel must "send a message to all those who have hurt or plan to hurt Israel – in cyberspace as well – that they would be hurting themselves. They will not be immune to Israeli retaliation.

"The US has announced that any attack on its cybernetic space would be considered a declaration of war and that it would go as far as firing missiles to respond to such an attack. This is a good criterion for us all," the deputy FM said. 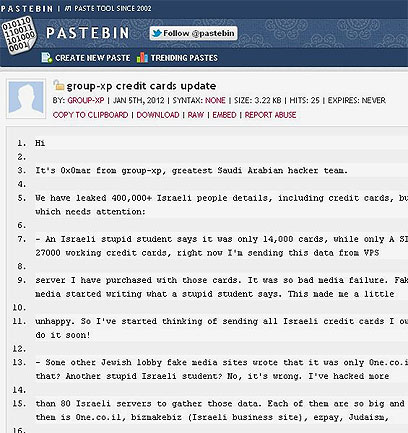 "It is an act of terror and should be treated as such. Even in this space we have the ability to actively harm those who harm us," he said.

Amir Phadida, an Israeli student, said he had uncovered the identity of "0xOmar", the hacker who leaked the personal details and credit card numbers of more than 20,000 Israelis last week. The student identified the hacker as Omar Habib, 19, who was born in the United Arab Emirates and currently resides in Pachuca, Mexico. However, the hacker himself told Ynet via email that "no one is going to arrest me, it's not possible." The hacker dismissed the claim that his identity had been revealed, saying: "If a stupid student thinks he can find me (within) 8 hours of work, what will Mossad do? But I'm still here and no one can find me, make sure, no worries, I'm waiting.

He claimed to be in possession of the personal details of a million Israeli citizens, and threatened to continue leaking them. "I'll send more files and more emails, how much time do Mossad or Interpol need to find me?" he asked mockingly, adding that he was from Riyadh, not Mexico.

Ayalon also addressed the Iranian issue, saying "(Iranian President Mahmoud) Ahmadinejad is mistaken if he thinks he has a year of quiet to advance the nuclear program."

The deputy FM said Israel would be able to absorb a possible rise in the price of oil by importing oil from other countries. "During a visit to Geneva I met a Nigerian executive who said his country could produce a million more barrels of oil for export if needed," Ayalon said.