Palestinian President Mahmoud Abbas's Fatah movement said on Sunday it would have to re-evaluate its reconciliation pact with the Islamist Hamas group following the rejection of a Fatah visit to the Hamas-ruled Gaza Strip last week.

In a statement, Fatah's Central Committee said Hamas's behavior showed it was not interested in the implementation of the reconciliation agreement signed in Cairo last year, which included the formation of a unity government and the holding of a parliamentary election on May 4.

Tension between the two Palestinian factions contrasts with the positive atmosphere stressed by both sides in December, when Abbas and Hamas chief Khaled Mashaal met in Cairo and agreed on steps to end hostility.

Fatah said three of its senior officials had been stopped by Hamas security officers at the entrance to the Strip on Friday and had been forced to turn back.

The action by Hamas officers was "inadequate and humiliating," Fatah said in a statement. 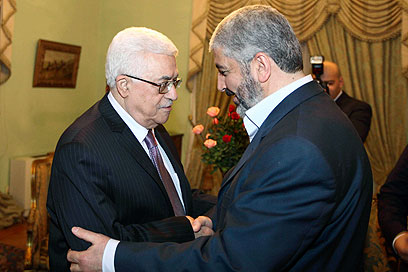 Hamas in turn accused Fatah of reneging on the Egyptian-brokered deal to end four years of bitter rivalry that has split the Palestinian national movement.

It said Abbas was putting peace talks with Israel, taking place in Jordan, ahead of Palestinian unity.

Negotiators are searching for a way to revive direct negotiations that have been suspended for over a year.

"If Fatah has made a decision to backtrack from reconciliation in favor of returning to negotiation with the Zionist enemy, they should bear full responsibility for the consequences of such a decision before the Palestinian people, and the Egyptian mediator," Hamas said in a statement.

The Hamas Interior Ministry denied it had made a decision to ban visits by Fatah officials and accused Abbas's movement of "exaggerating what happened" as a pretext for getting out of its reconciliation commitments.

It pointed out that senior Fatah official Nabil Shaath had been in Gaza for several days without facing restrictions.

It also accused one of Abbas' envoys, Sakher Bseisso, of "cursing God" when asked by a Hamas officer to wait until he contacted his commanders.

Hamas said Bseisso would have to face a judge on the blasphemy charge if he visited Gaza in future.