The group of soldiers, which was lead by Rabbi Matti Dan, head of the Ateret Cohanim movement, waved Paratroopers Brigade banners on the roof of a building in the quarter and chanted "Am Yisrael chai (Nation of Israel lives)" and "We can trust no one but our father in heaven." 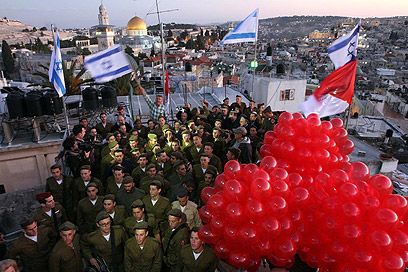 The soldiers stopped in the Muslim Quarter before heading to the Western Wall, where their swear-in ceremony was scheduled to take place later in the evening.

Rabbi Dan told the soldiers, "You have reinvigorated us. There is no way that soldiers will go to the Kotel without us embracing them in the Old City." The soldiers marched through streets and alleys which saw a number of Arab riots over the past few years.

The IDF Spokesperson's Office said, "Unfortunately a group of civilians chose to take advantage of this dignified event (swear-in ceremony) to create a provocation intended for the media. The fact that media outlets were invited to cover the event proves this was a planned provocation."

The army said soldiers should be left out of the political debate.

The Ateret Cohanim Yeshiva, which was founded in the Old City in 1983, operates in a number of Jewish-owned buildings situated at the heart of the Muslim Quarter. Some 200 students currently attend the institution. Most of them enlist in the army after completing their studies.