Europe to launch war on settlers? The heads of European Union delegations to the Palestinian Authority have drafted a document with harsh recommendations meant to strengthen the PA's control over east Jerusalem and press Israel to change its policy in the West Bank. The harsh document, whose essence is being published for the first time, was acquired by Ynet.

Europe to pursue Area C projects Lieberman to Europe: Israel has nothing to apologize for 'Ireland most hostile country in Europe' Olmert: Europe is not our enemy

The recommendations include the preparation of a "blacklist" of settlers considered violent, in order to later mull the option of banning them from entering the European Union. The document also seeks to encourage more PLO activity and representation in east Jerusalem. Moreover, the European report advises senior EU figures visiting east Jerusalem to refrain from being escorted by official Israeli representatives or security personnel.

'Jerusalem must be divided'

In addition, officials are encouraged to instruct European tourism firms to refrain from supporting Israeli businesses located in east Jerusalem and to raise EU public awareness of Israeli products originating from the settlements or from east Jerusalem. 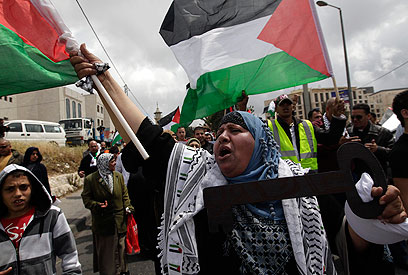 Palestinians rally in east Jerusalem (Photo: Reuters)
A Western diplomat told Ynet that the Europeans are well aware of the implications of the latest recommendations. He also expressed his hope that the document will encourage the EU to undertake substantive steps in order to put an end to settlement expansion, including legislation that would outlaw financial transactions that allow for settlement construction.

Ayalon said Clegg's comment gave the Palestinians an excuse to set pre-conditions for entering negotiations with Israel on a Middle East peace settlement.