Prime Minister Benjamin Netanyahu pledged to provide an "alternative to the Tal Law within six months." Netanyahu met Monday with IDF reserve soldiers who protested against the extension of the law.

"We know we should divide the burden in a better and more just way," Netanyahu said. "Unlike previous governments, which automatically extended the Tal Law by five years, we've decided to do things differently – to bring the Tal Law to a vote before the Knesset. We know we must come up with a better and more just solution, but not one which divides the people. We have six months to do so. I really believe it'll happen within six months. I'll bring the government's proposal to the Knesset."

One of the protest leaders told Netanyahu: "The Tal Law shouldn't be extended, not by an hour and not by a year. Do you pledge not to extend the Tal Law?" To which the prime minister replied: "Wait, you're getting ahead of yourself." The activist continued to stress the matter, evoking a humorous reaction from Netanyahu: "Are you running for the Knesset? You're sure displaying promising signs." 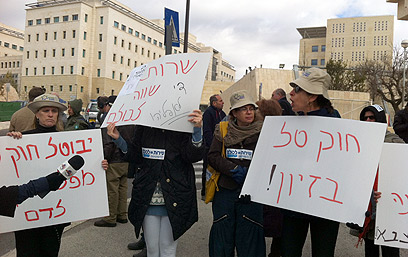 Protest against Tal Law in Jerusalem

At first Netanyahu declared that the Tal Law would be extended by an extra five years and an official government debate had already been in the works. However following the political turbulence on the matter, it was decided to let the Knesset vote whether or not to extend the law this upcoming summer.

Meanwhile, A protest encampment was erected in Tel Aviv on Thursday morning over the proposed extension.

Among the 'suckers' encampment' activists there is a widespread belief that extending the validity of the Tal Law is a cynical and politically motivated action.

"The government is scheming," said Idan Miller, one of the men behind the encampment idea. "It (the government) is ostensibly shortening the law from five years to just one but that time period wasn't random – it's an election year."

The 'suckers' encampment was erected near the Tel Aviv central railroad station by representatives from organizations including The Israeli Forum for Equal Service.

The activists include reservists, students, parents IDF bereaved families, IDF disabled veterans and high school students. Their intention is to remain in the encampment until Sunday when they plan to head to Jerusalem ahead of the cabinet's vote on the Tal Law extension.

According to Lieberman: "Our position is very clear and I'm happy that the government has yet to make a decision on the matter."

The Tal Law allows yeshiva students over the age of 22 to take a year off their studies in order to obtain professional training or work experience without being drafted. After this year, they must commit to an abbreviated army service or a full year of national service or to return to full-time studies. The law was passed by the Knesset in July 2002, and in 2007 was extended by an additional five years.