Iran's Revolutionary Guard began naval maneuvers Saturday in the latest show of force near the strategic Strait of Hormuz, the critical Gulf oil tanker route that Tehran has threatened to close in retaliation for tougher Western sanctions.

Plans for new Iranian war games in the Gulf have been in the works for weeks. But they got under way following stern warnings by Iran's Supreme Leader, Ayatollah Ali Khamenei, about any possible US or Israeli attacks against Tehran's nuclear facilities. 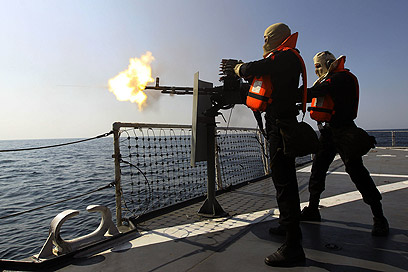 Iran has so far made no attempts to disrupt shipping through the strait, the route for one-fifth the world's crude oil. The US and allies have said they would respond swiftly to any attempts at a blockade.

Last month, Iran's navy wrapped up 10 days of exercises in the Gulf, but the Revolutionary Guard – which is directly under control of the supreme leader – represents a significantly stronger military force and controls key programs such as missile development. Iranian state media announced the new maneuvers, but gave no further details.

Khamenei, in a speech nationally broadcast on Friday, staked out a hard line after suggestions by Israel that military strikes are an increasing possibility if sanctions fail to rein in the Islamic Republic's nuclear program.

He pledged to aid any nation or group that challenges Israel and said any military strikes would damage US interests in the Middle East "10 times" more than they would hurt Iran. The comments also may signal that Tehran's proxy forces – led by Lebanon's Islamic militant group Hezbollah – could be given the green light to revive attacks on Israel as the showdown between the archfoes intensifies.

"From now on, in any place, if any nation or any group confronts the Zionist regime, we will endorse and we will help. We have no fear expressing this," said Khamenei, using the phrase widely used by Iran's leader to describe Israel.

The West and its allies fear Iran could use its uranium enrichment labs – which make nuclear fuel – to eventually produce weapons-grade material. Iran insists it only seeks reactors for energy and medical research.