Other 13 Security Council members vote in favor of proposal calling for Assad to step down. Ambassador Rice: Further bloodshed will be on Beijing, Moscow's hands

Russia and China vetoed on Saturday an Arab and Western-backed resolution at the UN Security Council calling for Syrian President Bashar Assad to step down over his bloody crackdown on a popular uprising.

The setback in diplomatic efforts to defuse the revolt peacefully came after world leaders and Syrian opposition activists accused Assad's forces of killing hundreds of people in a bombardment of the city of Homs, the bloodiest night in 11 months of upheaval in the pivotal Arab country.

US Ambassador Susan Rice said her country was "disgusted" by the vote, adding "any further bloodshed that flows will be on their (Russia's and China's) hands."

Araud said Russia and China had "made themselves complicit in a policy of repression carried out by the Assad regime."

Russian Ambassador to the UN Vitaly Churkin said the draft UN resolution calling for a transfer of power in Syria was "unbalanced" and "did not reflect the reality of the situation in Syria."

"Yesterday the Syrian government murdered hundreds of Syrian citizens, including women and children, in Homs through shelling and other indiscriminate violence, and Syrian forces continue to prevent hundreds of injured civilians from seeking medical help," Obama said in a statement. 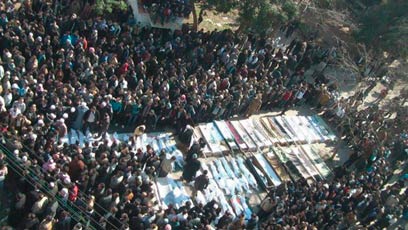 But US Secretary of State Hillary Clinton said on Saturday it had not been possible to work constructively with Russia ahead of the vote, even though military intervention in Syria - fiercely opposed by Moscow - had been absolutely ruled out.

"I thought that there might be some ways to bridge, even at this last moment, a few of the concerns that the Russians had. I offered to work in a constructive manner to do so. That has not been possible," she told reporters at the Munich Security Conference. Moscow said before the vote that the resolution was not "hopeless", but its wording needed to be altered to avoid "taking sides in a civil war". Foreign Minister Sergei Lavrov said it was still possible to reach consensus.

But US Ambassador Rice said amendments that Russia had proposed were "unacceptable".

After what US officials called "vigorous" talks between Clinton and Lavrov, Moscow announced that its foreign minister would fly to Syria in three days to meet Assad. France called the Homs assault a "massacre" and a "crime against humanity". Turkey said hundreds had been killed and the United Nations must act. Tunisia expelled the Syrian ambassador, and the flag above its embassy was brought down. Death tolls cited by activists and opposition groups ranged from 237 to 260, making the Homs attack the deadliest so far in Assad's crackdown on protests and one of the bloodiest episodes in the "Arab Spring" of revolts that have swept the region. Residents said Syrian forces began shelling the Khalidiya neighborhood at around 8 pm (1800 GMT) on Friday using artillery and mortars. They said at least 36 houses were completely destroyed with families inside. Anti-Assad rally outside UN ahead of vote (Photo: AP)

As news of the violence spread, angry crowds of Syrians stormed their country's embassies in Cairo, London, Berlin and Kuwait and protested in other cities. Syria denied shelling Homs and said Internet video of corpses was staged. It is not possible to verify activist or state media reports as Syria restricts independent media access. The official Syrian account was disregarded across the globe, where international condemnation was thunderous. French Foreign Minister Alain Juppe said: "The Syrian authorities have jumped a new hurdle in savagery: the massacre in Homs is a crime against humanity and those responsible will have to answer for it." In remarks aimed at Moscow, he said any country that blocked UN action would bear a "heavy responsibility in history". Tunisia announced it was expelling the Syrian ambassador and revoking recognition of Assad's government. The head of a committee of parliamentarians from Arab states said Arab countries should expel Syrian ambassadors and cut ties. Turkish Foreign Minister Ahmet Davutoglu said: "If the Syrian administration is given the understanding that the current situation of hundreds of people dying daily can continue and the UN will not take a stance against it, the atmosphere of clashes will increase more." It was not immediately clear what had prompted Syrian forces to launch such an intense bombardment, just as diplomats at the Security Council were discussing the draft resolution on Syria. Russia gave conflicting signals about its intentions before the vote. In an interview early on Saturday, Lavrov suggested Moscow would cast a veto if the resolution was presented without amendments. "If they want another scandal for themselves in the Security Council, then we probably cannot stop them," Itar-Tass news agency quoted him as saying. But as events marched on during the day with many of the world's top security and foreign affairs officials gathered at a conference in Munich, Lavrov said: "We are not saying that this resolution is hopeless." Russia objected that the resolution contained steps against Assad, but not against his armed opponents, Lavrov said. "Unless you do it both ways, you are taking sides in a civil war." Clinton told the conference: "As a tyrant in Damascus brutalizes his own people, America and Europe stand shoulder to shoulder. We are united, alongside the Arab League, in demanding an end to the bloodshed and a democratic future for Syria." Russia has balked at any Security Council language that would open to door to "regime change" in Syria, a rare Middle East ally where Moscow operates a naval base and sells billions of dollars in advanced weapons. Clinton and Lavrov met at the conference for what a US State Department official called "a very vigorous discussion". "The secretary made clear that...the United States feels strongly that the UN Security Council should vote today." Video footage on the Internet showed at least eight bodies assembled in a room, one of them with the top half of its head blown off. A voice on the video said the bombardment was continuing as the footage was filmed. Syria's state news agency SANA denied Homs was shelled, accusing rebels of killing people and presenting them as casualties for propaganda purposes before the UN vote.

The Syrian government says it is facing a foreign-backed insurgency and that most of the dead have been its troops. SANA reported funerals of 22 members of the security forces.

Some Syrian activists said the violence was triggered by a wave of army defections in Homs, a stronghold of protests. Rami Abdulrahman, head of the British-based Syrian Observatory for Human Rights, told Reuters that the death toll had reached 237, with 60 people still missing. His group said 21 other people were also killed in other parts of Syria on Saturday, including 12 in a funeral procession in an outlying district of Damascus.

Reuters and AP, AFP and Yitzhak Benhorin contributed to the report