Cairo says it won't back down in dispute with US over crackdown on nonprofit groups; Egypt won't change course 'because of some aid,' prime minister says

Egypt refused to back down Wednesday in a dispute with the US over Cairo's crackdown on nonprofit groups despite American threats to cut aid.

Despite the warnings from Washington, Egypt's military-backed Prime Minister Kamal el-Ganzouri struck a defiant tone Wednesday, telling reporters he was "saddened" by the pressure Egypt was facing but insisting authorities "can't back down or won't change course because of some aid."

"Egypt used its legal right to face some violations by civil groups," he said. "The lofty judiciary moved and discussed and investigated the case. ... The West then turned against us because Egypt exercised its rights."

El-Ganzouri also charged that aid pledged by Arab states has also stalled since the dispute began. He said he met in early December with Arab ambassadors "who promised that Egypt will receive a lot of money," but two months later "none of these promises have come through."

He hinted that the US and Arab allies are withholding aid money because Egypt has adopted more independent policies since the uprising that ousted President Hosni Mubarak in February.

With tensions rising, the Chairman of the Joint Chiefs of Staff, Gen. Martin Dempsey, is to travel to Egypt this week for talks with military ruler Field Marshal Hussein Tantawi. Dempsey's spokesman, Col. Dave Lapan, said Wednesday the trip has long been planned, but that the nonprofit spat will come up if it hasn't been resolved.

He said Dempsey would talk with Egypt's leaders about "choices and consequences," but declined to elaborate.

'Americans have done nothing wrong'

On Sunday, Egyptian investigative judges referred 16 Americans and 27 others to trial on accusations they illegally used foreign funds to foment unrest in the country.

That immediately drew a sharp rebuke from Washington, with Secretary of State Hillary Rodham Clinton warning that failure to resolve the dispute may lead to the loss of some $1.5 billion in aid to Egypt.

Egypt's net international reserves were down 50% year-on-year by the end of December as the country's economy is reeling from the overall effect of the uprising and the turmoil that followed. The government is discussing with the International Monetary Fund a $3.2 billion loan. 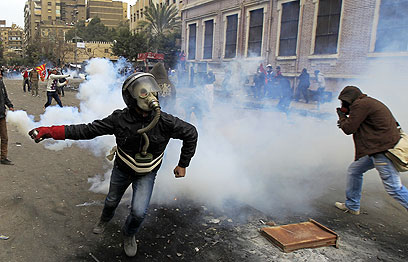 State Department spokeswoman Victoria Nuland called on Egypt to release the Americans, saying the 16 "have not done anything wrong."

Nuland said the US received a 175-page document in Arabic outlining the charges, but "our view remains that this is not fundamentally a judicial issue," but an issue between governments over the proper role of the groups.

Local civil groups say the campaign on foreign-funded nonprofit groups is in preparation for a harsh crackdown on local rights groups who have been documenting and lobbying against the military rulers since they took office last year.

Hafez Abou Saada, a veteran Egyptian human rights activist, said Cairo's clash with the US over the groups "is incomprehensible and unjustified and goes to show that the case against the civil groups is not a legal but is a political one."

He said el-Ganzouri's comments are "an attempt to rally a domestic front behind the government and create an enemy."

Earlier, in an attempt to rally public support, el-Ganzouri appealed to nationalist sentiment and urged Egyptians to unite in the of face tough times ahead. He argued that the current conditions in Egypt are worse than after the country's crushing military defeat in the 1967 war against Israel.

"What we are seeing now is worse than after the 1967 defeat, which was a military one," he said. "What is happening is a call to defeat the whole people, not only a military defeat. If we unite, we will get through this."

El-Ganzouri also warned that Egypt was the backbone of the Middle East, a region in flux at the moment, and that "if it (Egypt) falls, the whole region will follow."

"Neither the West, nor the Arab brothers are aware of this," he said.