In a high-stakes gamble, an imprisoned member of a Palestinian terrorist group has waged a hunger strike for almost two months, trying to draw attention to Israel's military justice system.

Khader Adnan, 33, has refused food for 55 days, making his hunger strike the longest ever waged by a Palestinian detainee. With his condition rapidly deteriorating, Israeli authorities are scrambling to keep him alive. His death could turn the previously obscure Adnan into a Palestinian hero and set off new violence.

Adnan, a member of the armed terrorist group Islamic Jihad, has lost 60 pounds (27 kilograms) and now weighs about 140 pounds (63 kilograms). His skin is discolored, his hair has fallen out, he cannot walk, and he has been shackled to his bed, said lawyers and his wife Randa, who have seen him in a series of Israeli hospitals.

He is drinking water that is occasionally enhanced with electrolytes and vitamins he needs to keep him alive. His condition is considered severe.

The protest could not only cost Adnan his life but could also have political implications.

Islamic Jihad, an Iranian-backed terrorist group that has killed dozens of Israelis in suicide bombings and other attacks, has vowed to punish Israel if Adnan dies. The group could fire rockets into Israel from its stronghold in the Gaza Strip, where it has recently built up a powerful arsenal of new weapons.

Adnan was a spokesman for Islamic Jihad in the West Bank. It isn't known if he directly participated in attacks on Israelis, and officials would not say what he is suspected of.

Adnan is being held under a policy known as "administrative detention," said his lawyer, Tamar Peleg-Sryck. The system allows Israel to hold suspected militants without charge based on secret information that is not shared with lawyers. It is generally used in cases deemed high-risk. 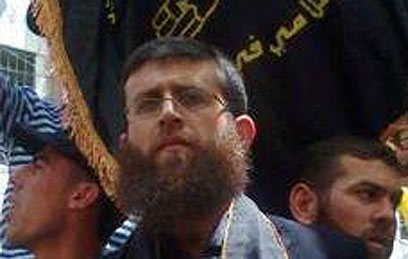 Khader Adnan prior to arrest

Adnan is being held under guard at an Israeli hospital, and prison officials say they are watching his condition closely. The prison service declined comment Thursday, but officials have said in the past that they have permission to force feed Adnan if necessary.

Adnan's lawyers appealed the detention order Thursday at a special hearing in the hospital, said Mahmoud Hassan, one of his lawyers. There was no ruling and the judge could take a week to give his decision.

Hassan, who works for the prisoners' advocacy group Addameer, said he was barred from discussing specifics of the hearing. But he said Adnan attended the hearing in a wheelchair, his hands and feet in shackles. He spoke with difficulty and vowed to continue his hunger strike.

Adnan is only allowing doctors from the Israel branch of Physicians for Human Rights and the International Committee of the Red Cross to check on his condition. Neither group would comment.

The case has generated widespread support in Palestinian society.

Small demonstrations in support of Adnan have been held in the West Bank and Gaza Strip in recent days. Followers exchange updates on Twitter, and Facebook users have changed their profile pictures to that of a bearded Adnan.

Adnan believes his imprisonment, and the events leading to his detention, have robbed him of his dignity, according to his wife and lawyers.

"My husband tells me, 'I am striking against humiliation,'" said Randa Adnan. "His determination is strong, even though he resembles a man who has stepped away from life."

Adnan began his hunger strike shortly after he was arrested in a raid on his home on Dec. 17 in the northern West Bank village of Arabeh.

Adnan claims soldiers made sexual innuendoes about his wife and mocked his Muslim faith. He also says Israeli agents beat him during interrogations, tied him in painful positions to a chair, ripped hair out of his beard and wiped dirt on his face. Israeli officials have not commented on those allegations.

He is also protesting his administrative detention.

Israeli military courts can order the detentions for up to six months and renew the orders indefinitely. Suspects have been held as long as three years at a time without charge, according to Israeli human rights groups.

Israel says the practice is necessary in cases of dangerous militants because airing the evidence would risk exposing its network of Palestinian informants. But critics say the system is open to abuse because it is not transparent.

Peleg-Sryck, the attorney, said there are currently 309 administrative detainees in Israeli jails. A prison spokeswoman was unable to verify that number.

Israel's military justice system in the West Bank, set up after Israel captured the territory in the 1967 Mideast war, has come under scrutiny in unexpected quarters in recent weeks.

A film examining the system, "The Law in These Parts," by Raanan Alexandrowicz was awarded the best international documentary by the Sundance Film Festival jury in Utah this year.

Based on interviews with former military judges, it portrays the system as a tool to justify Israel's treatment of Palestinians. It showed how military judges who are supposed to be independent adjudicators faced the problem of trying suspects considered their enemies.

About 95 percent of Palestinian suspects in 2010 were convicted of at least one charge against them, according to a military court report.

Administrative detention prisoners represent a tiny fraction of the estimated 4,200 Palestinians held in Israel, many who are doing time for charges ranging from throwing stones at Israeli soldiers to killing Israeli civilians.

Palestinian society venerates the prisoners, overlooking their crimes and viewing them as freedom fighters.

The second longest hunger strike in Palestinian history was by a woman who refused food for 43 days before she was released in 1997.

The late Mohandas K. Gandhi popularized the hunger strike as a protest tool during the Indian independence movement in the 1940s. Another famous case was that of Bobby Sands, an Irish Republican Army activist who along with nine other inmates starved to death in a 1981 hunger strike in a British prison.

In recent years, dissidents in Venezuela and Cuba have died of hunger strikes.