Iran's state TV is showing tens of thousands of pro-government demonstrators rallying across the country to mark the anniversary of the 1979 Islamic Revolution.

Related stories: "In the coming days the world will witness Iran's announcement of its very important and very major nuclear achievements," Ahmadinejad said in a speech, broadcast live on state television. 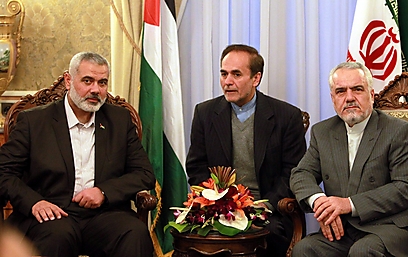 Haniyeh in Tehran (Photo: EPA)
Iran has "broken the idol" of the Holocaust, said Ahmadinejad in his speech on the 33rd anniversary of the Islamic revolution.

"The West and the colonialists have created an idol they call the Zionist regime. The spirit of this idol is the Holocaust (...) and the Iranian nation, with courage and foresight, has broken the idol, preparing the release of Western people, "said Ahmadinejad, who sparked international outcry by denying several times in the past, the genocide of Jews during World War II.

Ahmadinejad did not elaborate on the upcoming announcement but insisted Iran would never give up its uranium enrichment - a process that makes material for reactors as well as weapons.

Iran has said it is forced to manufacture nuclear fuel rods, which provide fuel for reactors, on its own since international sanctions ban it from buying them on foreign markets. 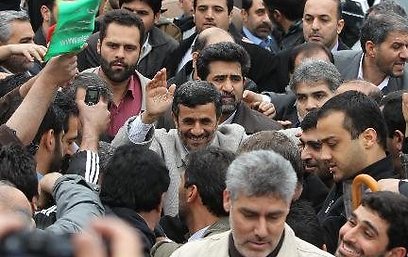 "The fight will continue for the liberation of the entire land of Palestine and Jerusalem and the return of all Palestinian refugees," he stated in a speech relayed live on state television.

A real-size model of the United States drone RQ-170 Sentinel, captured by Iran in December near the border with Afghanistan, is on display at the rally in Tehran's famous Azadi, or Freedom, square.

Iran has touted the drone's capture as one of its chief successes against the West. The TV report says the drone is a "symbol of power" of the Iranian armed forces "against the global arrogance" of the US.

Haniyeh arrived in Tehran on Friday for a three-day visit, and is due to speak at a Saturday rally marking the 33rd anniversary of the 1979 Islamic revolution, Iranian media reported.

"Iran will not retreat one iota from its position on defending the rights of the Palestinian people," Rahimi was quoted as saying, adding that Tehran "will use everything at its disposal to support the oppressed Palestinians.

"Soon the Zionist regime will be punished for its plots and aggression," Rahimi said, adding: "The Palestinian issue is a red line for us."

The presidency website reported that Haniyeh "congratulated Iran on the 33rd anniversary of the triumph of the Islamic revolution," and "thanked Tehran's brave stance on the Palestinian issue."

Dudi Cohen and AFP contributed to this report